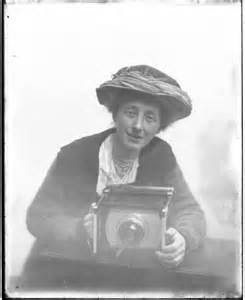 Olive Edis got her first camera in 1900, and set up a studio in Sheringham, Norfolk, in 1905. She became known for her photos of local fisher folk, and also became known for her colour photography. She took her first autochrome pictures in 1912. Later she also had studios in Cromer and Ladbroke Grove in London. The studio in Sheringham still exists - it was designed by her uncle, an architect, with a glass roof to give natural light, and she became known for only using natural light in her photographs.
In 1918, she went to France to photograph the battlefields of France and Flanders, and the British Womens' Services, for the Imperial War Museum. She was only the fourth or fifth photographer officially commissioned to go to a war zone, and the first woman to do so.
In 1920, she was commissioned by Canadian Pacific Railway to take photos for their advertising campaign, and these are believed to be some of the earliest colour photographs of Canada.
She also took portraits of prime ministers, authors and prominent women, including Lloyd George, Thomas Hardy and Nancy Astor, as well as many other prominent people in society.
She died in 1955, and is buried in Sheringham.
Collections of her work are still held by the Imperial War Museum, and Cromer Museum - which holds over 2,000 pictures, the largest single collection of her work. There was also an exhibition of her work last year in Norwich Castle Museum.
Posted by Eigon at 04:11 No comments:

Email ThisBlogThis!Share to TwitterShare to FacebookShare to Pinterest
Labels: photography 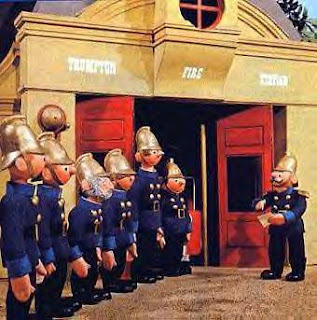 He was a reassuring, friendly voice for small children for over twenty years as the presenter of Playschool, and then there was Playaway, and the wonderful Camberwick Green, Trumpton and Chigley. He also had a long theatre career, and even appeared in some early Doctor Who episodes.
So here are Pugh, Pugh, Barney McGrew, Cuthbert, Dibble and Grubb, at Trumpton Fire Station, on parade.
Posted by Eigon at 10:39 No comments: 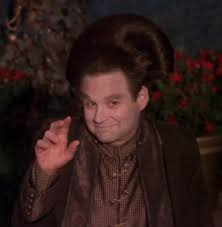 I came late to Babylon 5 fandom - when it was first on TV, I didn't have access to a set, though I read the novelisations.
Then a friend lent me the entire 5 seasons, and the films, on DVD, and I came to appreciate the barbed wit of the exchanges between G'Kar and Londo, and the relationship between Ambassador Delenn and Captain John Sheridan.
And in the background there was Vir Cotto, light relief in the Centauri embassy - but as the show progressed, he became a more nuanced character, with a good heart.
And now I hear that Stephen Furst, who played Vir, has died, at the age of 63. He had suffered with diabetes for many years, and died of complications due to diabetes. He had a long and varied career on US TV, but Babylon 5 is the only work of his that I've come across.
Posted by Eigon at 10:00 No comments:

Sending up the Bat Signal for the Last Time

I heard yesterday that Batman had died. That's my Batman, of course, the first actor I saw take on the cowl. Adam West was 88, and brought a wonderful seriousness to the silliest situations. He was associated with the role all his life, and accepted it with great grace and humour.
In an alternate timeline, the pilot of Alexander the Great might have been picked up for a series in the 60s. Adam West was the co-star to William Shatner's Alexander, playing his friend Cleander - so if that series had taken off, there would have been a different actor in the Captain's seat of the Starship Enterprise as well.
He also played Col. Dan McReady in Robinson Crusoe on Mars, as the astronaut who did not survive the landing on the Red Planet. 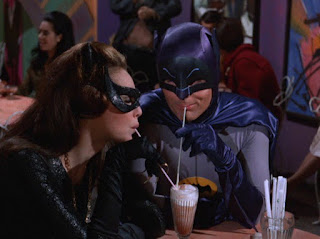 Here is Batman sharing a milk shake with Catwoman.
Posted by Eigon at 10:40 No comments:

I came across a couple of Rudolf Valentino films on DVD recently. Of the two, Blood and Sand was the one I wanted to see, because it was one of his most famous films - and when I was growing up in Lancashire, when a man wanted to swear but didn't want to use real swearwords in front of the children, "Blood and Sand!" was a phrase that could safely be used, taken from the film, and the later re-make with Tyrone Power.
Although it was 1922, and silent films had been around for a while, the film makers didn't seem to have caught on to having the cast list at the beginning of the film. Instead, the name of the actor who had just appeared was written on the next caption card.
It was also noticeable that actual bull fighting scenes were kept to an absolute minimum - not many special effects in those days (and being a film stuntman was incredibly dangerous!). Some scenes may have been from a real bullfight, with a huge crowd and the bull fighters seen in the middle distance. Close ups of Rudolf Valentino in the bull ring showed him posing with the sword and cape, and that was about it.
The real action was going on out of the bull ring, where cocky Juan Gallardo has a meteoric rise to fame and fortune, marries his childhood sweetheart Carmen, and is seduced by the wicked Donna Sol. He's out of his depth in society and he knows it - but he still keeps going back. When Carmen finally finds out what he's been up to, his apology to her is one of the lamest possible, some rubbish about having a "good love and a bad love" - but since this is a film made in 1922, all Carmen can do is turn away and quiver tragically.
In emotional turmoil, Juan goes to fight in the last bull fight of the season.... It's all very tragic, and I can see why it was popular enough for a re-make in 1941, but it really hasn't stood the test of time.

I had never heard of The Eagle, made in 1925, but I enjoyed it a lot more than Blood and Sand.
In this, Rudolf Valentino plays a dashing young Russian lieutenant - and he was a pretty good actor, because Vladimir Dubrovsky is quite different from Juan Gallardo. He comes to the notice of the Czarina when he heroically stops a runaway carriage (using the Czarina's own horse - a good example of stunt work as the rider jumps onto the lead carriage horse at a gallop). The Czarina invites him to supper, and obviously intends to seduce him - at which he takes fright and runs away. This wasn't what he signed up to the army for! His captain is fortunately on hand to take his place at supper, and the Czarina soon issues a warrant for Vladimir's arrest for desertion.
Meanwhile, the wicked Kyrilla has taken over the family estate, the sort of chap who keeps a bear in the cellar to feed his enemies to, and Vladimir arrives just in time to find his father dying in a peasant's cottage. He vows vengeance, gathers a band of peasants together, and basically becomes Robin Hood.
Then the bandits, without their leader (now known as The Black Eagle), capture Kyrilla's beautiful daughter (and her aunt, but they let her go again immediately!). I liked her! As the bandits pursued the open carriage, she was standing up and fighting them off with a horse whip! She is, of course, the girl who Vladimir rescued in the runaway carriage at the beginning of the film.
So he takes the place of the French tutor who has been sent for to teach the beautiful Mascha, and gets inside the family home, and into a delightful battle of wits with Mascha, played by Vilma Blanky. She has her suspicions that she's seen the handsome French tutor before....
It all comes to an exciting climax when The Black Eagle is unmasked, escapes with Mascha, and runs straight into a troop of soldiers who arrest him for the desertion at the beginning of the film. The Czarina signs his death warrant - but first, he is allowed to get married, and the general who is to carry out the sentence is Vladimir's old captain....
So it all ends happily for the lovers, but not so good for the poor peasants who have to carry on putting up with Kyrilla's rule over them. 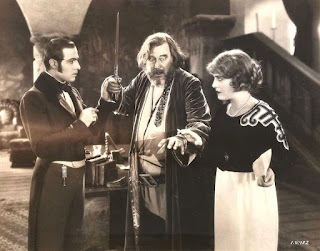 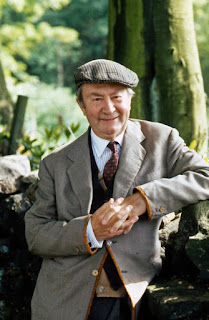 I watched him for years on Last of the Summer Wine, and enjoyed his voice work on Wallace and Gromit. I once heard an interview with him where he described playing Samuel Pepys for live TV, back in the early days of TV broadcasting - dashing from set to set, and about to make a flamboyant entrance into a church, his companion murmured "You do realise you're going to a funeral?" just in time.
He'll be missed.
Posted by Eigon at 10:58 No comments: