The Rihannsu Novels of Diane Duane

Back in the 1980s, I was a big Star Trek fan, and one of my favourite authors (in that time when there was very little commercially available apart from novels and re-runs of the classic TV series) was Diane Duane. I saw her several times at conventions, and she was always great fun. She even gave me some good writing advice once.
Her aliens were inventive (like the spider character in The Wounded Sky, and the rather sweet Horta Starfleet lieutenant) and her female characters were rounded, interesting characters who did interesting things.

So yesterday on Twitter, she shared her outline for the last two (which became three) novels in her Rihannsu series of Star Trek novels. I'd read the first two - My Enemy, My Ally and The Romulan Way, but never knew there were any more. I spent a lot of time outside fandom for various reasons, and moved house several times, so I had to part with a lot of my belongings along the way, including most of my collection of Star Trek novels. But I still have The Romulan Way. I couldn't quite bring myself to part with that one.
So I was quite excited to find that the story continues and reaches a satisfying conclusion. Rihannsu, by the way, is what the Romulans call themselves. It may only be a term used in the novels, but it's canon as far as I'm concerned.

The Romulan Way involves a Federation agent in deep cover in Romulan/Rihannsu society, Terise Haleakala-LoBrutto, who uses the Rihannsu name Arrhae ir-Mnaeha t'Khellian, and who finds herself in a position to save Dr. McCoy's life. There's lots of meaty information about Rihannsu society, and intrigue, and adventure - and I really need to re-read it before I settle down to the sequels! But the main character over the series is Ael i-Mhiessan t'Rllaillieu, commander of the Bloodwing, who joins forces with Kirk and the Enterprise to stop some unethical Romulan research in My Enemy, My Ally. I understand great things are in store for her in the sequels - if she can stay alive!

The sequels are: Swordhunt, Honor Blade and The Empty Chair - and I can see why I missed them coming out so completely! Swordhunt and Honor Blade came out in 2000, and The Empty Chair in 2006, and in 2000 - well, let's just say that the new millennium was not a fun time for me, so the last thing I was thinking of was Star Trek novels, though I was aware of Diane Duane's Young Wizard series at the time (also very good!).
Posted by Eigon at 02:07 No comments:

Greater love hath no woman.... I sat and watched Braveheart on TV with my mum!

Now she's gone home, and I took advantage of the trip into Hereford, to see her onto the train, to treat myself.

So I got the graphic novel Ms Marvel Super Famous, Ann Leckie's Ancillary Mercy (the third book in the trilogy - I will be sure to read it while drinking good tea), and Paul Cornell's Who Killed Sherlock Holmes?, the latest of his Shadow Police novels (because I feel the need for something to tide me over until the next Peter Grant novel by Ben Aaronovitch comes out - good as the comics are, they are quite quick reads).

And cake, at Patisserie Valerie, of course.

Email ThisBlogThis!Share to TwitterShare to FacebookShare to Pinterest
Labels: books 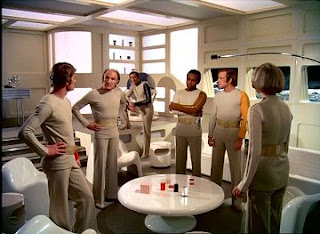 On 13th September, 1999, the moon was blasted out of Earth's orbit, thereafter travelling implausibly quickly to visit other planets....
Posted by Eigon at 10:55 No comments:

Trowelblazers - Alice Kober and Linear B

The first name that springs to mind when talking about the decipherment of Linear B script is Michael Ventris. Linear B is the name given to Mycenean Greek script which was found in excavations at Knossos, Mycenae and other sites and is the earliest written form of Greek known. There is also Linear A, which recorded Minoan, and has not yet been deciphered, out of which Linear B developed.
No-one ever mentions Alice Kober, without whose work, Michael Ventris would have had a much more difficult time. 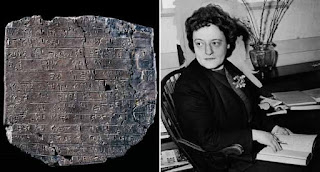 She was an academic, an assistant professor of classics at Brooklyn College and in the 1930s she started studying Linear B inscriptions in her spare time, creating a massive card index system. She even had to make the index cards herself, out of old greetings cards and so on, as paper was scarce in wartime America. What she was doing was cross referencing all the relationships between the characters of the script, and the frequency of their use - all essential work to find out the meaning behind the symbols. At the same time, she was learning a variety of ancient languages, including Hittite, Akkadian, Old Persian, and Chinese. She also studied field archaeology in New Mexico and Greece, and also learned Braille, to transcribe textbooks, library materials and exams for blind students at the college.
In 1946, she won a Guggenheim Fellowship, to study Linear B full time for a year. She spent some time in Oxford, copying inscriptions found by Sir Arthur Evans at Knossos, and she discovered that the language she was transcribing was an inflected one, written in a syllabic script.
She died in 1950, at the age of 43, possibly of cancer, as she was a chain smoker. She had met Michael Ventris once, and reportedly didn't like him, but she did leave him her archive when she died. Michael Ventris took over her work, and discovered that the inscriptions were lists of commodities in Mycenaean Greek two years later. Before he could write a book about how he did it he, too, died - in a car crash at the age of 34.
Posted by Eigon at 02:14 No comments:

A Pair of Gaiters

I saw a pair of gaiters on a market stall in the Buttermarket in Hay today. They were only £10, and nice leather, so I took them home with me. Sadly, they were made for skinny little legs, and the buckles were purely decorative over a solid seam.
Fortunately, I have a little craft knife, so I unpicked the seam, cut the lining, and buckled them on: 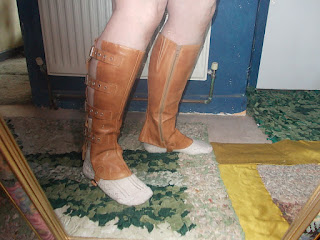 I have a pair of suitable shoes in almost the same colour, and they'll go well with my brown trousers for a Steampunk adventurer look!
Posted by Eigon at 08:44 No comments: