Thoughts from a corner of Sweden: If the UK leaves Europe, where does that leave me ? (and the many other archaeologists in the same sinking boat)

Thoughts from a corner of Sweden: If the UK leaves Europe, where does that leave me ? (and the many other archaeologists in the same sinking boat)
Posted by Eigon at 05:40 No comments: 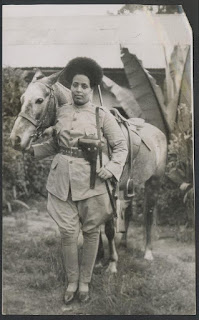 In 1935 Italy, under Mussolini, invaded Ethiopia, and quickly took over the country. This is one of the Ethiopian troops defending her country.
Posted by Eigon at 04:31 No comments: 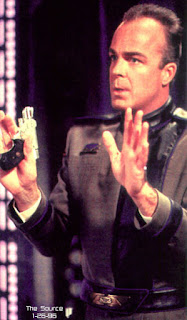 Jerry Doyle, who played Michael Garibaldi in Babylon 5, has just been reported dead by the BBC. He was sixty.
I had no idea that he'd been a jet pilot before he became an actor.

Email ThisBlogThis!Share to TwitterShare to FacebookShare to Pinterest
Labels: Babylon 5

The Bandit of Sherwood Forest

This is the 1946 swashbuckler with Cornel Wilde as the son of Robin Hood - and watching it has cleared up a false memory I had.
I thought I remembered a scene from the Richard Greene Robin Hood series, in black and white, in which Robin is captured and must fight a duel with (I thought) the Sheriff, but first he is kept in a cell for three days without food or drink, so the Sheriff is sure to win. During this time, Maid Marion (I thought) swings baskets of food and water to his cell window, so he isn't starved at all.
What I was actually remembering was this film, which is in glorious Technicolour (though I may have watched it in black and white, it's so long ago). It's Cornel Wilde in the cell, and it's Lady Catherine who swings baskets of food over to him - and he's fighting the Regent of England in a trial by combat, because William of Pembroke dearly wants to kill the boy himself.
And it occured to me that William of Pembroke, played by Henry Daniell, is probably meant to be William Marshal, Earl of Pembroke, who was indeed Regent of England during the minority of King John's son Henry III (the boy king in this version has the most appalling pageboy wig). And William Marshal, historically speaking, was one of the good guys, and most unlikely to be plotting to kill the boy king and crown himself, while throwing out Magna Carta and banishing the Earl of Huntingdon (original Robin, Cornel Wilde's dad, who returns to the greenwood to fight tyranny).

And then I started thinking about all the ways the film could be made better than it is.
We start the film with lots of bowmen riding through the forest to a meeting with the Earl/Robin, including old friends Friar Tuck, Little John, Will Scarlet and Allan-a-dale. Earl Robin is about to attend a meeting at Nottingham Castle of the Regent's Council, and he fears for the future of the country.
There's one glaring omission in the meeting of old friends here - where's Marion?
And Earl Robin then rides to the castle alone.
This would not happen. Earls had a retinue to follow them everywhere. So if the film makers wanted to start with a bit of spectacle, why not start with Earl Robin and his retinue heading for the meeting, during which he discusses his worries with Marion and Young Robert (who in the film is in the North Country, who knows why? and is not recognised as Robin's son when he first meets the outlaws). Then, when the meeting goes badly and Robin is banished, he can go to the Queen's chambers to collect Marion, telling the Queen his plans as he does so, and leave the castle - and then collect all his old friends together in the greenwood. This would also get over the old "love/hate at first sight" plot line with Lady Catherine, because Young Robert would already know her from Court, and not try to sexually assault her in a humourous way the first time he meets her in the greenwood when she and the Queen have fled the castle.
But at least the film did have two named women talking to each other, and not about a man, and at least Lady Catherine (Anita Louise) made decisions and didn't just hang around waiting to be rescued.
The fight scenes weren't bad, as long as you accept fencing with broadswords. Cornel Wilde was actually an Olympic class fencer, and you could see they were going for the Errol Flynn 1938 Robin Hood film look, with fencing shadows on the walls and a Korngold-style musical score. Cornel Wilde had a cheery grin when he fenced, but he wasn't Errol Flynn.

Suffragette on a Scooter 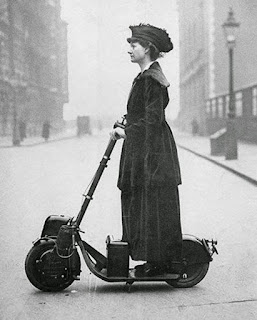 Here's Lady Florence Norman, who's stopped to pose for a photo on her way to work in 1916. She was a member of the Liberal Women's Suffrage Union - her husband was a Liberal MP - and the Women's Liberal Federation. She also ran a hospital in France during the First World War, for which she was awarded the Mons Star. At this point, she was an office supervisor.
I'd love to have a scooter like that!
Posted by Eigon at 00:45 No comments:

An Apple for an Archer

They missed a trick when they were naming the characters for this episode of The Adventures of Robin Hood - the 1950s version starring Richard Greene. I would have called them all after apple varieties.
As it is, the young hero is Timothy Cox, who grows apples but can't shoot a bow - and he needs to win an archery contest in order to marry the girl he loves. He's played by a young Kenneth Cope, who went on to become Marty Hopkirk in Randall and Hopkirk Deceased, who glares moodily at Paul Eddington, a regular guest actor, who started his Robin Hood career as Second Peasant and worked his way up to be villain of the week. In this episode he is Pierre of Bordeaux, a Frenchman who can shoot with the longbow but prefers to lounge around playing the gittern (a sort of early guitar). He doesn't expect poor Timothy to make a good show of things at the archery contest planned for the hand of Mary Quartermaine - who is also a pretty good shot.
So Timothy goes off into the greenwood, where Robin Hood teaches him how to shoot - and in doing so gives a lot of information about how bows are made, the correct stance for shooting, and the different arrowheads.
When I was re-enacting regularly, members of our group (including me) used to do "the arrow talk", with a variety of different arrow heads, and all sorts of interesting information about the making of the bows and the linen bow strings, and fletching the arrows - and the scenes where Timothy is learning about bows and arrows is practically the prototype of that re-enactor talk!
He wins the contest, of course.
Posted by Eigon at 11:19 No comments:

Remembering the Battle of the Somme 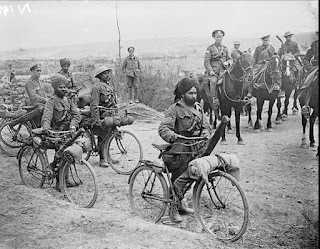 Indian bicycle troops at the Battle of the Somme.
Posted by Eigon at 02:37 No comments: