I've just been reading The Long Earth, by Terry Pratchett and Stephen Baxter, which was very good.
The premise is that there are a multitude of alternate Earths to either side of our Earth, with the important difference that none of these other Earths have any humans in them, and now people have discovered how to visit those other worlds by means of a simple device called a Stepper.
Some people wander the worlds, others head out in groups like the old Wild West wagon trains.
The book mentions a problem also talked about by Charles Stross, in his Merchant Princes series - secure places are no longer secure when you can Step one world over, walk to the middle of the place you want to get into (for instance Fort Knox) and Step back into this world, right into the bank vault. Though in Charles Stross's books only particular families have the ability to step between worlds, and all the worlds are inhabited.
I started thinking about what I would want to see if I could Step to another Earth - and came to the conclusion that there would be nothing much out there that I would want to visit. It would be interesting, of course, to see the Wye Valley in its primal glory, filled with ancient woodland. But when I go out into the wilds, I'm looking for the signs of ancient habitation, the stones and banks that show that people have lived in that landscape before - and in the Long Earth there is no archaeology, because there have never been people.
Posted by Eigon at 13:18 No comments:

I downloaded this classic adventure tale from Project Gutenberg the other day - in the story I'm writing my characters are visiting the lost city of Kor, and I wanted to see how Rider Haggard had originally described it. This was great fun, discovering the ruined city inside the crater of a volcano, with lots of interesting caverns to discover as Ayesha led Leo down to the Flame of Immortality.
And then they came to an abyss, which was crossed by a narrow plank - and I stopped and thought "Where on Earth did the plank come from?"
I'm pretty sure the locals weren't building their homes with planks, though descriptions are somewhat sketchy as Rider Haggard's characters are not much interested in native huts. And it's a Lost City - they weren't trading with anyone anywhere else.
It's just one of those little world-building touches that I think Rider Haggard didn't even consider, so he just put in something familiar to his readers (and himself).
Posted by Eigon at 12:45 No comments:

A Room Full of Stars

I'm feeling rather pleased with myself. I've just spent the evening building my own Constellation Projector, including wiring a switch for the first time in my life.
It looks something like this one, from the Science Museum - mine was made for The Works: 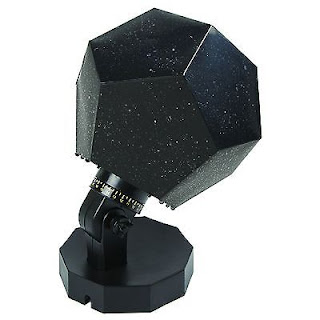 When I switched it on for the first time, and turned out the main light, all that time fiddling with tiny screws and double-sided sticky tape was totally worthwhile! I was standing in the middle of a cloud of stars, and it was magical!
Something like this: 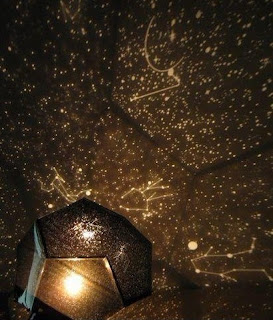 I'm heading for bed now with a mug of cocoa, so I can play with the settings - it's supposed to be able to show which constellations are overhead for any month of the year, and by the hour.
My own personal galaxy!