I went to see this film last night, about a 13 year old girl who wanted to follow in her father's footsteps and become an eagle huntress. Her name is Aisholpan, and the film showed her helping with her father's eagle, and at school where she boarded during the week with her little brother and sister (the school being too far away from the family home to go daily), climbing down the cliff to take an eaglet from the nest to train for herself, and on to the annual Eagle Festival, where she was the first girl to take part, competing against around 70 men up to the age of 80.
It was amusing to see interviews with some of the male eagle hunters, who trotted out all the usual rubbish excuses for why a girl couldn't do what they did - and then after the Festival, when she had won the gold trophy, they all had a long awkward silence before they said that it didn't really count, and she wouldn't be able to put up with the conditions of a real eagle hunt in the winter.
So her dad, who was brilliant, and supported her all the way, took her out to catch her first fox with her eagle.
It's a wonderful film, full of beautiful photography, and narrated by Daisy Ridley, who played Rey in The Force Awakens earlier this year. 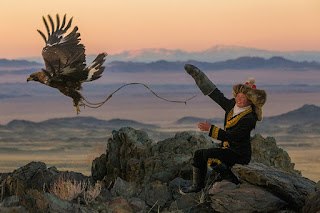 I've just been watching the "Good Morning!" clip from Singing in the Rain. What talented people they were - Donald O'Connor, Debbie Reynolds and Gene Kelly, all tap dancing together.
They don't make films like that any more!
It's nice that the first thing people are thinking of in tribute to Debbie Reynolds is such a cheerful song.
Posted by Eigon at 05:24 No comments:

Email ThisBlogThis!Share to TwitterShare to FacebookShare to Pinterest
Labels: actors

I cried when Hazel went with El-Ahrairah at the end of the book when I first read it - it's beautifully done. The book was adapted very well done on Radio 4 recently, too, and worth looking out for. I never really liked any of his other books, but I think this one deserves to join the classics. 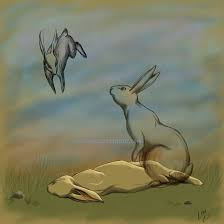 It was beautifully done in the film, as well.
Richard Adams was 96, and it seems, like Hazel, he was feeling tired, so he left his body behind to go with the Prince with a Thousand Enemies and join his Owsla.
Posted by Eigon at 11:43 No comments:

Email ThisBlogThis!Share to TwitterShare to FacebookShare to Pinterest
Labels: authors

There has been a great disturbance in the Force.... 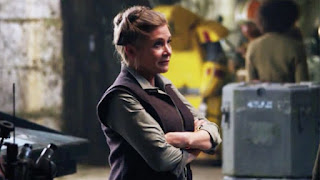 I actually got the Season 2 DVD a little before Christmas - I don't watch TV all that fast!
But I had been looking forward to this, after loving Season 1, and it didn't disappoint. Whitney Frost was a satisfying villainess, Peggy Carter had two handsome men to choose from in the romantic stakes, and a fairly brutal heart to heart conversation with Jarvis - and we finally got to meet Mrs Jarvis, who was delightful. Dottie Underwood is back, too, and looks fantastic in a black evening dress while beating up bad guys. And Rose from the front office and Dr Samberley (who no-one likes) get to go on an important mission.
The scene shifted from last season's New York to Los Angeles (Howard Stark has started making movies), and there's a lot about old white men keeping power to themselves, while women and people of colour (like Whitney and Jason Wilkes the black scientist) are marginalised.
Also a lot of rats are killed.
Jack (now SSR Chief in New York) is seduced by the Dark Side, and people watch nuclear explosions with no protection apart from sunglasses.
The last scene is a set up for a third season - I do hope they make one!
Posted by Eigon at 08:36 No comments: 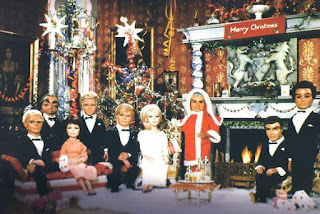 Email ThisBlogThis!Share to TwitterShare to FacebookShare to Pinterest
Labels: Thunderbirds

A Cyclone of Scorpions

My Young Man has been to stay, and we watched many DVDs. I introduced him to The Librarians (he loved the Christmas episode, and the film involving vampires) and he introduced me to Scorpion, which he told me was kind of like The Librarians but solving real world problems instead of magic.
I really enjoyed the pilot episode (I've seen three so far, and it's all good), because it is incredibly clever people solving problems by thinking rather than shooting at stuff. It's even more impressive that the pilot episode is based on a true event in the life of the real Walter O'Brien (the leader of the Scorpion company). There was a day when the computers at LAX airport went down, with over 50 planes in the air needing to land, and they fixed it.
I'm not entirely sure that it involved a jet airliner flying very low over an airfield while a Ferrari sped underneath it, but it was a thrilling sequence!
I also like the way that the four geniuses - Walter, Sylvester, Toby and Happy - take 9 year old Ralph under their wings, because he's growing up a genius too, and having trouble adapting to the world. They're not just brilliant at what they do - they are also kind enough to take time to play chess with a lonely kid, and tell him that the collective noun for scorpions is a cyclone, and now he's part of the cyclone.
Ralph's mother, Paige, becomes their liason with the outside world, because they have trouble dealing with ordinary people, too. The group is being "handled" by Homeland Security agent Cabe Gallo, who gets their cases for them.
It's kind of on the edge of SF, bordering on real life, and I think I'm going to enjoy the rest of the series.
Posted by Eigon at 12:35 No comments: 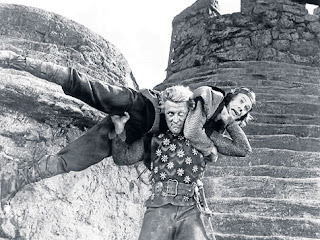 The Vikings had a big influence on me as a child - I still love that film!
And now Kirk Douglas is 100 years old - some good news in a year with so many celebrity deaths.
Posted by Eigon at 01:18 No comments: 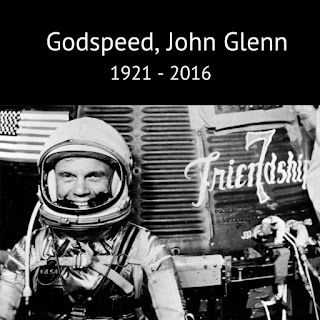 This is what a hero looks like!
He was the third American in space, and the first to orbit the Earth, in the Friendship 7, in 1962.
At the age of 95, he was the last surviving member of that first group of astronauts, known as the Mercury 7.
He was also a pilot during the Second World War and the Korean War, earning six Distinguished Flying Crosses as well as other awards, going on to become a top test pilot.
And he was a friend of the Kennedy family, and a US Senator for Ohio for 24 years, as a Democrat.
When he retired from politics, he went back into space, at the age of 77, on the shuttle Discovery, as part of experiments on aging in space, making him the oldest human who has ever gone into space.
And he was married to his childhood sweetheart for 73 years. He married Anna in 1943, just after he joined the Marine Corps. She survives him.
Posted by Eigon at 02:44 No comments:

Email ThisBlogThis!Share to TwitterShare to FacebookShare to Pinterest
Labels: space 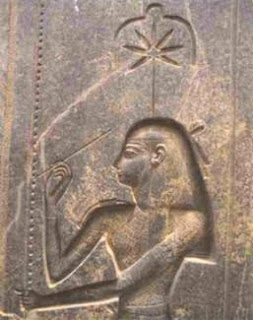 Why have I never heard of this goddess before?
I've been familiar with Thoth, her consort, since I read The Tales of Ancient Egypt by Roger Lancelyn Green (the classic Puffin edition) at junior school, but I don't recall ever coming across Seshat, with the odd seven pointed thing hovering over her head, before.
And she's really very interesting - her name means "she who is the scribe", and she is often depicted inscribing the years of a pharaoh's reign on a palm leaf rib. She was the goddess of wisdom, writing and mathematics, which also included astronomy, architecture and surveying, and building (for which accurate mathematics was required). Knowledge of history was another of her attributes. She recorded the spoils of war, and the speeches of the pharaohs, and was part of the ceremony of "stretching the cord", the surveying tool which was used for accurate measurement in building, and symbol of the power of the pharaoh. As a funerary goddess, she kept the memory of the dead alive by writing an account of their lives.
She was also known as Mistress of the House of Books - her priests oversaw the library, and she was supposed to look after the library of heaven. In Spell 10 of the Coffin Texts, it says: "Seshat opens the door of heaven for you." Sounds like a library to me! Though it could also refer to her astronomical attributes. Sadly, she doesn't seem to have a temple in her honour, though I suppose any library would fulfill that role.
She is usually shown wearing a leopard skin, or a dress spotted like a leopard skin - symbolic of the stars and night sky.
Posted by Eigon at 11:26 No comments: