Well, that was a darn sight better than Braveheart!

I'd only seen clips of the 1995 film starring Liam Neeson, specifically the climactic duel between Rob Roy and the evil Archie Cunningham. The fight arranger was William Hobbs, who was mentioned admiringly by Peter Morwood in the panel on screen swordplay at WorldCon this year.
It was the sword choreography in that duel that made me want to see the rest of the film, so now I know just what bad blood was between Rob Roy and Archie, who really had no redeeming features whatsoever. It was also obvious that the Marquis of Montrose, played by John Hurt, knew that there had been some underhand dealings - suddenly, Cunningham could pay his tailor's bills, and where could that money have come from if it were not the cash that Montrose had loaned to McGregor, and which had been stolen from him?

The film was shot entirely on location in Scotland. I was a bit dubious about all the long shots at first, but it was worth it to show off all that magnificent scenery.
There's also a scene at a Highland celebration where a woman sings a song in Gaelic - I see from Wikipedia that the soloist was the lead singer from Capercaillie, Karen Matheson.
Oh, and Rob Roy's little brother Alistair was a complete idiot.
Posted by Eigon at 14:11 No comments:

Shadow of the Past - Big Finish

Dr Liz Shaw has always been one of the lesser known Companions of the Doctor, spending a season with the Third Doctor and then disappearing as Jo Grant is introduced.
I rather liked her - sensible, scientific, and taking no nonsense from the Doctor.
Sadly, Caroline Johns (who played Liz Shaw) didn't do much for Big Finish - but I've just finished listening to Shadow of the Past, and if it was all to this standard then what she did do was very good.
The story is part of the Companion Chronicles, and it's a two parter, with Caroline Johns as Liz Shaw and Lex Shrapnel as the young UNIT soldier who accompanies her.
She's been called in, as an older woman, to the opening of a UNIT vault that was sealed in the 1970s, which leads to her telling the story of the crashed space ship in the vault to the young soldier accompanying her.
The story is by Simon Guerrier, and nicely catches the tone of the Third Doctor's UNIT days, and he's placed it between Doctor Who and the Silurians and The Ambassadors of Death - so the Doctor's relationship with the Brigadier is quite strained at this point (after the Brig blew up the Silurian caves).
I shall be getting more Big Finish stories with Liz Shaw, I think.
Posted by Eigon at 10:32 No comments:

Email ThisBlogThis!Share to TwitterShare to FacebookShare to Pinterest
Labels: Big Finish, Doctor Who 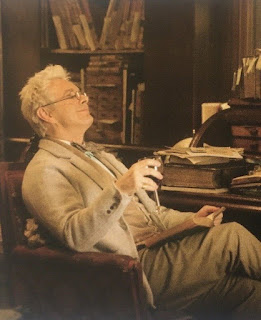 May there be good books, good wine, and angels dining at the Ritz.
Posted by Eigon at 11:22 No comments:

The Feast of Stephen 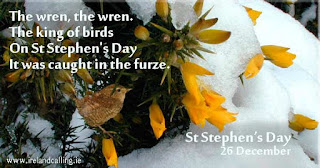 Email ThisBlogThis!Share to TwitterShare to FacebookShare to Pinterest
Labels: folklore 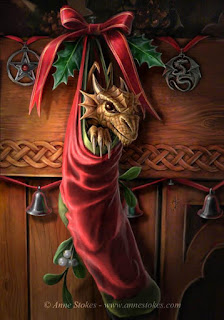 Email ThisBlogThis!Share to TwitterShare to FacebookShare to Pinterest
Labels: Christmas

While I was walking round Rodmarton village on my last morning there, I noticed a public footpath sign saying Monarch's Way, with one side pointing out across the fields and the other into the village.
So I looked it up, and Monarch's Way turns out to be quite an interesting long distance footpath.
The footpath is 625 miles long, and follows the approximate route (on public rights of way) that Prince Charles took during his escape after the Battle of Worcester in the English Civil War. Eventually, he was taken to the Continent aboard a ship called the Surprise, and that ship is featured on the way markers.
Rodmarton lies on the segment of the path that runs between Cirencester and Tetbury. The prince eventually reached Shoreham, on the South coast, where the ship was waiting for him. The journey had taken him six weeks.
Some of the path runs along disused railways and along canals, neither of which existed in 1651, and is split into three parts with three guide books for the convenience of the modern walker, who is not being pursued by Roundheads.
Occasionally I hear of re-enactors doing long distance walks in full kit - the Ermine Street Guard along Hadrian's Wall, for instance, and way back in the late 1970s/early 1980s (shortly before I was a member, anyway) Sir Gilbert de Hoghton's Companie of Foote did a sponsored walk somewhere around Preston, for which they got a commendation at a short ceremony at the Oak Apple Day battle in 1980 or 81. It was the first (and only) Sealed Knot battle I was involved in (as pike person). I don't remember where it was held, but I do remember being part of the group who took the flag onto the battle field, and shouting "The King and the Cause" when the group got their award.
I wonder if any Sealed Knot members have walked the Monarch's Way.
Posted by Eigon at 06:02 No comments:

Travelling by Train in a time of Floods

My journey home was smooth and easy. I got a lift down to Bristol with my friend, and arrived at Temple Meads station in plenty of time to have a cup of coffee at Bonaparte's Bar, which was even on the right platform for my train. Then it was an easy change at Newport and up to Hereford, just in nice time for the bus home.

The journey out was not quite so easy. It started with the train from Hereford to Newport being 6 minutes late. This was just enough for me to miss my connection. However, the lovely man at the Help Desk gave me a new route which would get me into Stroud only ten minutes after I had originally planned!
So I got on the train to Bristol Parkway and Swindon. After a little while on the train, there was an announcement to say there was flooding between Bristol Parkway and Swindon, so the train would be taking an alternative route which would add an extra 25 minutes to the journey.
The views of Bath were very nice.
Swindon at least has a lot of space undercover. I bought a magazine at the WH Smiths there, and asked them what their charity box was. The chap behind the counter was pleased to explain the WH Smiths Trust to me, which seems to exist to help staff to fund raise for good causes.
The train to Stroud arrived, and I noticed that I would be approaching the station from the opposite direction from my original route.
By the time I got into the station, I was about an hour late, and worrying that my friend would not still be there to pick me up. She was there, but she had also texted my Young Man to ask for my mobile number.
I don't have a mobile.
So then he was worried as well that I had disappeared somewhere between Hereford and Stroud!
Fortunately he didn't have to stay worried for too long.
Next time I'm booking the ticket to Kemble - I can walk to my friend's house from there!
Posted by Eigon at 06:14 No comments: