Sorry to hear that Andre Previn, the classical musician, has died.
Here he is in one of the greatest moments of Morecambe and Wise: 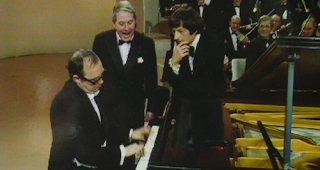 All the right notes, but not necessarily in the right order....
Posted by Eigon at 10:53 No comments:

One of the Champions

I learned today that Richard Barrett was the former director of global counter-terrorism at MI6. He was giving his opinion on the case of Shamima Begum.
So that's what he did when he left Nemesis! 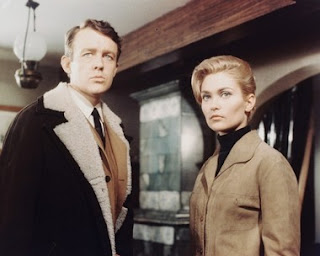 Too Many Targets - Avengers from Big Finish

This is the British, 1960s, Avengers, of course, not the more famous Marvel Avengers. Big Finish don't only do audio adventures for Doctor Who - they've branched out into other cult TV shows as well.
It's a great temptation, because of the Doctor Who link to Big Finish, to think of this story as Steed with all of his Companions. The story is set at the time when Steed is paired with Tara King, played by Emily Woodward, but gradually brings in all the other people he's worked with up to that time.
It took me a while to get used to Julian Wadham as Steed - after all, Patrick Macnee had such a distinctive voice, but as they said in the actor interviews which are also on the CD, the characterisation is all there in the script. They'd got the way Steed talked exactly right. It's also quite nice that Christopher Benjamin, who plays Mother, also appeared in several episodes of the original series.
Cathy Gale gets involved because of a rogue killer gorilla in Surrey, and Beth Chalmers does have a voice very like Honor Blackman's. All the actresses involved said it was great fun doing the period RP accents!
Mrs Peel (Olivia Poulet) is now running Knight Industries, which also seems to be involved in the case, and Dr David Keel (Anthony Howell) gets involved when a colleague of his gets kidnapped.
There's a glorious scene with the constantly frustrated KGB agent who is Steed's Russian counterpart(voiced by Dan Starkey, sounding very much like Warren Mitchell, who originally played the part).
The script is based on a novel that came out in 1990, written as a homage to the series by John Peel and Dave Rogers, and it really captures the witty banter and bizarre situations of the original series.
I loved it!
Posted by Eigon at 12:26 No comments: