"Do not despise the snake for having no horns - who is to say it will not become a dragon?"
Those were the opening lines of The Water Margin, narrated by Burt Kwouk, who died today aged 85. He was everywhere on TV in the 1960s and 70s - whenever someone Chinese was needed (usually a baddie). He was also, of course, Cato in the Pink Panther films, and appeared in several Bond films. Here he is in the pilot episode of The Champions, hunting our heroes across the Himalayas as a Major in the Chinese Red Army: 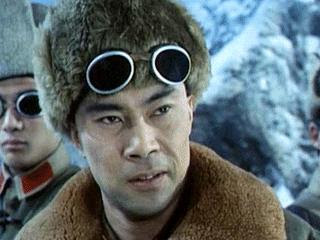 Email ThisBlogThis!Share to TwitterShare to FacebookShare to Pinterest
Labels: actors

Famous in Gloucestershire!
Helen O'Neil, who was born Helen Donovan, lived at Camp House in Bourton-on-the-Water - the Camp referring to the Iron Age hillfort of Salmonsbury. In 1931, she became involved in the excavations at Salmonsbury, and she became a member of the Royal Archaeological Institute the following year, following that up in 1933 by becoming a member of the Bristol and Gloucestershire Archaeological Society. In 1938, she was invited to become Honorary Curator of the new Corinium Museum in Cirencester.
The Director of the dig at Salmonsbury was Dr Gerald Dunning of London Museum, and it was on the dig that Helen met her husband Bryan, who eventually became Chief Inspector of Ancient Monuments. Helen carried out work for Ordnance Survey and for the Ancient Monuments Inspectorate, and in 1948 she was elected to become a Fellow of the Society of Antiquaries.
Following her husband's death, Helen returned to live at Camp House, and became closely involved in archaeology in the county. In 1968, she recieved an MBE for services to archaeology, and published work in the Bristol and Gloucestershire archaeology journal from 1934 to 1977.

Elsie Clifford also did a large part of her archaeological work in Gloucestershire, and at about the same time as Helen O'Neil. Cheltenham Art Gallery and Museum holds the collection of artefacts from her work on Notgrove long barrow in 1934-5, as well as artefacts from several Romano-British villas she worked on. Notgrove had been dug before, but hers was the first properly scientific excavation of the site.
Although a close associate of such well-known archaeologists as Sir Mortimer Wheeler, she stuck to her status as an amateur. In 1968, she was awarded an OBE for her achievements in archaeology.
Posted by Eigon at 13:14 No comments: 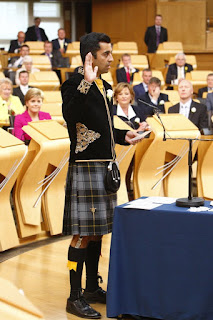 Isn't this brilliant? :)
This is Humza Yousaf, the MSP for Glasgow Pollock, being sworn in to the Scottish Parliament. I saw the picture on Twitter, shared by the Scottish Parliament, though the first thing I noticed as I scrolled down was that gorgeous embroidered jacket. I think he looks great in the kilt, too.
Posted by Eigon at 04:14 No comments: 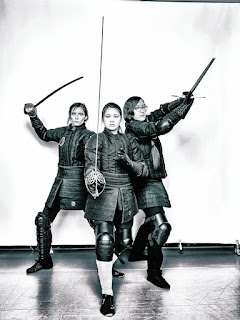 This picture is from an article in The Village Voice which my Young Man shared with me on Facebook. I can't share it directly from there (they do Facebook, Twitter and Google+), but it's well worth a read. It's all about women who practice Historic European Martial Arts (HEMA) - which includes various forms of swordplay from longsword to rapier - in East Harlem, New York, and the women only tournament they have organised. Fecht Yeah is actually happening this weekend in New York.
Posted by Eigon at 03:34 No comments:

Paul Revere is the famous one, riding through the night to warn the American militia that the British soldiers were on their way. But on April 26th, 1777, sixteen year old Sybil rode forty miles through the night doing the same thing, on her horse Star. Her father was Colonel Henry Ludington, and it was his men that she was riding to warn.
Here's a picture of the statue commemorating her ride. 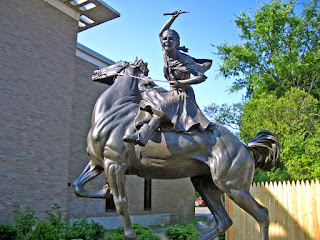 "Lozen is as my right hand, strong as a man, braver than most and cunning in strategy. Lozen is a shield to her people." So said the Apache chief Victorio, her brother. When Victorio's band left the San Carlos Reservation in 1877, where they had been sent to live in terrible conditions, Lozen fought by his side. While retreating from the US Cavalry, Lozen led the women and children of the band across the Rio Grande while the warriors held off the cavalry.
Victorio died fighting the Mexicans in 1880. On that occasion Lozen was not with the band, having left to escort a woman and child to the safety of the Mescalero Reservation. On that journey, she stole horses, and killed a longhorn with a knife rather than shoot it so as not to betray their position.
Lozen rejoined the band, now under the command of the elderly chief Nana, as they fought their way across New Mexico.
She was also with Geronimo when he broke out of the San Carlos Reservation in 1885, in the last campaign of the Apache wars. She also acted as a prophet for the band, praying to Ussen (the supreme god of the Apache) before battles.
She and Dahteste, another Apache warrior woman, started negotiating a peace treaty with the Americans. Dahteste was fluent in English, and had worked as a scout for the US Cavalry.
During this time, the Chiricahua Apache were rounded up and sent to Florida, and eventually Lozen and Dahteste surrendered. 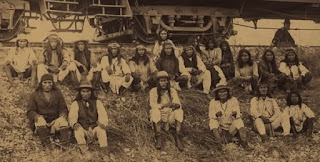 This is a picture of a group of Apaches waiting to be taken by train to Florida in 1886. Geronimo is somewhere near the front, and Lozen and Dahteste are sitting near the back. (Picture found on Red Power Media wordpress site).

Lozen died of tuberculosis while a prisoner of war in Alabama in 1890. She was fifty years old.
Dahteste survived tuberculosis and pneumonia and later married Kuni, another ex-scout. They lived at the Mescalero Apache Reservation in New Mexico. Dahteste lived until 1955.
Posted by Eigon at 04:57 No comments: