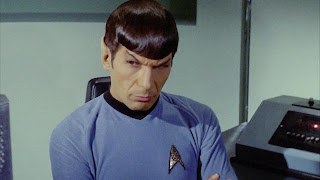 I've just heard the news that Leonard Nimoy has died, at the age of 83.
He was also a poet and a photographer.
I used to have a book of his poems - very much of their time, I think, (the 1970s), and always linked in my mind with posters from the Athena chain of shops. The only line I remember now is
"and logic will never replace love".

When I was seven, I spent a lot of time learning how to do the Vulcan salute. But the neck pinch never worked on my sister - we used to call it the Mr Spock Squeeze.

I think most importantly, though, Leonard Nimoy portrayed an intellectual hero - one who would solve problems with science and intelligence rather than brute force. Kirk was always a bit too handy with his fists or his phaser. And he seemed to be an intelligent and thoughtful person in his off screen life. 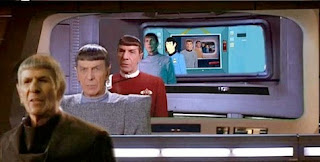 It's easy to focus on the raiding and pillaging, and miss the fact that one reason the Vikings were  so successful was that they were very good at organising things.
Posted by Eigon at 05:05 No comments:

This is very exciting - the first hundred people have been chosen from more than 200,000 applicants, who will be training over the next ten years to go to Mars.
By co-incidence, I've been reading a book of essays about Kim Stanley Robinson recently - Kim Stanley Robinson Maps the Unimaginable - in which various scholars discuss his Mars trilogy in some depth (but oddly, without once mentioning the word Demimonde, which is the half underground colony within a colony where some of the alternative economic ideas are worked out). That's Red Mars, Green Mars and Blue Mars, with an associated book of short stories called The Martians. In these books, the first Mars mission sends one hundred colonists - the First Hundred - who play a huge role in the way Mars is shaped over the next two hundred or so years. In KSR's future, the team was led by the Americans and the Russians (having been written towards the end of the Cold War), with other nationalities like Hiroko, the Japanese food specialist who becomes a mystic who leads a breakaway group - and a stowaway known as Coyote, after the Native American trickster god.
The Guardian has a list of the "top ten" who were chosen. They come from all over the world, including a Japanese lady who wants to open the first sushi bar on Mars! They are physicists and engineers and astronomers, a specialist in sustainable food systems and software developers. Five of them come from the UK, and fifty men and fifty women were chosen. Unlike Kim Stanley Robinson's First Hundred, though, who all went on the same flight, four astronauts will be sent at a time until there are 40 people living on Mars. Once there, they'll never be able to come back.

[Edited to add: On a second look at the news, it looks as if they might not make it off the ground, but at least they're trying!}
Posted by Eigon at 11:09 No comments: 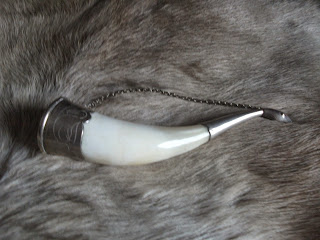 Isn't this delightful?
I treated myself to it today. I popped into the local Antique Centre to browse, and it caught my eye - and the first thing I thought of was Queen Susan's Horn, which is given to her by Father Christmas in The Lion, the Witch and the Wardrobe, and which is blown in Prince Caspian to get the children back to Narnia.
This one is not a blowing horn, but a drinking horn, probably with real silver, and it's a dainty little thing at only about eight inches long.
Posted by Eigon at 04:22 No comments:

Well, I've just pressed "Publish" on the last in my fantasy trilogy, and added the cover picture to the side bar here. It will be available from Smashwords shortly.
Lost Treasure of Ytir features a werewolf, a dragon, a unicorn horn, a plot to overthrow the Ard Ri of Ytir (which is the High King), and lots of magic. And one of my main characters has to make a life-changing decision. It was great fun to write, and I hope it will be as much fun to read.
Posted by Eigon at 09:48 No comments:

Email ThisBlogThis!Share to TwitterShare to FacebookShare to Pinterest
Labels: my writing

I've started writing a Steampunk adventure, during which my two heroines decide to take some healthy exercise while travelling on a barge up the Chinese Grand Canal.
Trouble was, I had no idea what they would be doing. I've never been a sporty person, apart from walking and archery - but Amelia and her Chinese friend Bic are definitely active, sporty types who are keen on keeping fit.
So I asked my Young Man, and instantly got the perfect response - club hurling, or Indian clubs. Even better, I found this picture: 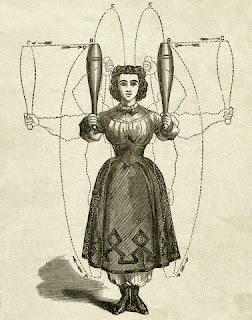 My characters wouldn't be wearing a long skirt like that though - they'd be dressed more like these girls in a gym class in 1899: 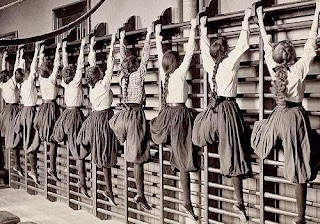 That should scandalise the locals!
Posted by Eigon at 13:04 No comments:

Email ThisBlogThis!Share to TwitterShare to FacebookShare to Pinterest
Labels: my writing, Steampunk

Is this the face of an ancient Amazon female warrior?

Is this the face of an ancient Amazon female warrior?
Posted by Eigon at 05:14 No comments: 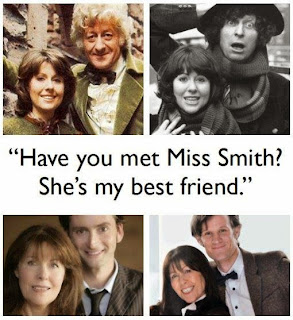 Still my favourite Companion - and who I want to be when I grow up!
Posted by Eigon at 10:56 No comments: