Hoping for a Good New Year 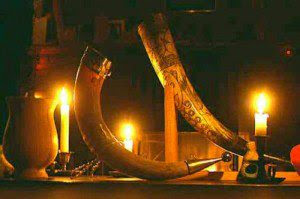 Luther Arkwright and the Knights of God

When I first picked up Grandville, and got enthused about the adventures of a badger Inspector at Scotland Yard, I had no idea how influential Bryan Talbot was as a comic artist.
I'm starting to get an inkling now.

Bryan Talbot's ground-breaking work, back in the 1970s and 80s, was The Adventures of Luther Arkwright. I was vaguely aware of it, but the price of copies secondhand made me think twice about looking any closer, while at the same time showing how desirable they were.
This year, The Adventures of Luther Arkwright were re-published in a huge volume along with the sequel Heart of Empire. It seemed like a good chance to see what all the fuss was about.
At the same time, I noticed that Big Finish had produced an audio version of Luther Arkwright, with David Tennant as Luther and Paul Darrow as Cromwell (and what a voice that man has for a good villain!). I sent off for that, too. I thought that if I listened to the story first, I might have a better idea of what was happening, as the hero jumped between parallel worlds, and if I had a grasp of the story, I could take more notice of what was happening in the background of the comic panels.
And what a treat it is! I can highly recommend the 3CD set.
I'm now about halfway through the graphic novel, savouring it slowly.

I've also been reading the interviews in the new volume, and getting a feel for just how influential the story, and the way the story is told, was when it first came out. People like Alan Moore and Michael Moorcock talk about the influence it had on their work.
I've just recently been revisiting that obscure children's series from the 1980s, Knights of God, so it struck me very strongly that Luther Arkwright influenced this series, too. Both have a religious military order, with an autocratic leader - you could swap Cromwell for the Father Abbot of the Knights of God and never notice the difference, including the descent of both of them into madness (though without the sexual perversions of Nathaniel Cromwell - it was a children's TV series, after all). In each case, a big military rally is planned (though the one in Knights of God never takes place) and both organisations are big on black uniforms and motorcycles. There's even talk of an uprising in Wales in Luther Arkwright, which is an important part of Knights of God, and in both the rebels are trying to put the original Royal family back on the throne.
There's a plot against both Cromwell and the Abbot by high ranking members of their organisations, though in Cromwell's case it's more like the failed coup against Hitler in the latter days of the Second World War. In Knights of God, it's all about Brother Hugo's personal ambition. Knights of God swaps the dimension-jumping between parallel worlds for Arthurian myth, but otherwise I think there are very close similarities indeed.
Posted by Eigon at 10:51 No comments: 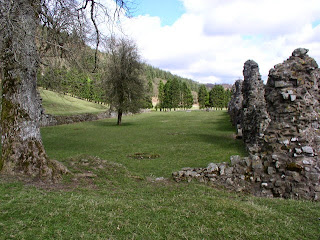 There's not a lot left of Abbey Cwm Hir, the Cistercian Abbey which was the last resting place of Llewelyn ap Gruffydd, the last independent Prince of Wales.
His head, of course, was elsewhere. It had been taken to London to be exhibited on London Bridge.
Yesterday was the anniversary of the Prince's death, near Aberedw, on the banks of the River Wye, just outside Builth Wells. Builth had a fine big castle then - it was an important centre - and Llewelyn spent the night at the smaller castle at Aberedw (nothing much remains of that now). He was with a small party when they were attacked by English soldiers, and Llewelyn was killed by an English man-at-arms called Stephen of Frankton. He had been going to meet with local leaders, with a view to them joining his rebellion against Edward I, while his main army was just outside Builth. They were defending the Orewin Bridge across the River Wye - but the Marcher Lords managed to outflank them by using a nearby ford. It was a rout, and the last rebellion of the independent Welsh was all over bar the shouting.
Dafydd, Llewelyn's brother, held out for a little while longer, but he was finally captured and taken to Shrewsbury, where he was hanged, drawn and quartered - a style of execution which had never been used on a man of such high rank before, and which Edward I had personally insisted on. I think that's the worst part of it - Edward and Dafydd had grown up together, and played together as children, when Dafydd's father was held hostage in the Tower of London, and Edward was ruthless enough to do that to him.
Llewelyn's head was reputedly washed in the spring at Cilmeri, near the spot where he was killed, and there is now a memorial to him there. That's a very Welsh thing - the legends of Welsh saints are littered with people who have their heads cut off at holy springs - the most famous being St Winifred at Holywell, who was revived by her saintly uncle - and there are other, less Christian, legends like the story of Bran's miraculous head, which entertained his followers magically for years after it had been cut off, and was finally buried at the Tower of London to protect Britain from attack. Bran is also the Welsh word for raven, hence the legend that there must be ravens at the Tower of London, or there will be disaster.
The big standing stone can easily be seen from the main road, and there's a ceremony there every year to commemorate his death.
Posted by Eigon at 11:12 No comments: 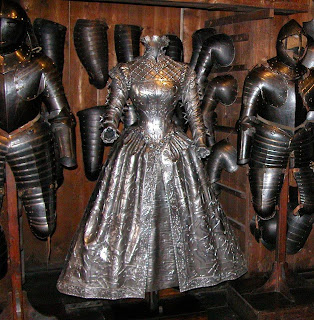 I have no idea who might have worn this, but it's rather wonderful!

The Landeszeughaus in Graz, Austria, is the largest collection of arms and armour in the world, and this is one of the pieces that is kept there. Originally it was the Armory of the State of Styria. From the 15th to 18th centuries, they needed to defend themselves from the Ottomans and the Hungarians, and this was a central depositry of everything they needed. When armoured fighting became obsolete, the collection was still added to, and they now have around 30,000 pieces, mostly of Austrian and German manufacture. The building the museum is housed in was built between 1642 and 1647, around the time the English Civil War was happening, and the displays cover four floors.
Posted by Eigon at 05:20 1 comment: