A wonderful actor - he'll be fondly remembered as the War Doctor, The Naked Civil Servant, The Elephant Man, and many more. He was the voice of Aragorn in the 1970s Lord of the Rings cartoon, and driven mad by the Crystal Skulls in that Indiana Jones film no-one talks about.
On Twitter, all sorts of people are saying what a wonderful person he was off-screen as well. 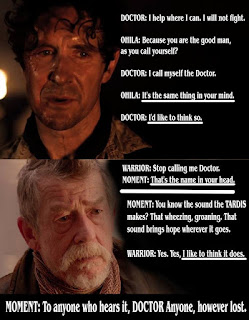 Email ThisBlogThis!Share to TwitterShare to FacebookShare to Pinterest
Labels: actors, Doctor Who

Eve Stewart was the second wife of James Stewart, of Sydney University. James had a long interest in the archaeology of Cyprus - he requested to be posted there during the Second World War, but spent most of the war as a POW. He also bequeathed his large collection of books about Cyprus to the Cyprus Museum before he began his war service.
His first wife, Eleanor, was also an archaeologist, and she assisted him on his early digs in Cyprus. 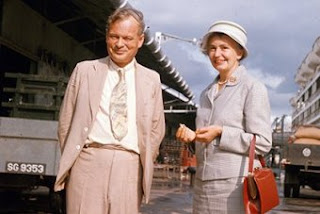 After the War, he headed back to Australia via Cyprus - he was to become the first person to teach archaeology formally at an Australian University. On the way met Eve Dray, who shared his interest in the archaeology of Cyprus. He arranged for Eve to come to Australia as his "technical assistant", and in 1951 he divorced Eleanor and married Eve.
James died in 1962, and Eve spent the next 50 years completing his work. She had some influence over the way the Department of Archaeology in Sydney University developed, and it was the collection put together by James and Eve that formed the basis of the Cypriot Collection in the Nicholson Museum.
There is a biography of the couple called Love's Obsession, by Judy Powell.
Posted by Eigon at 05:49 No comments: 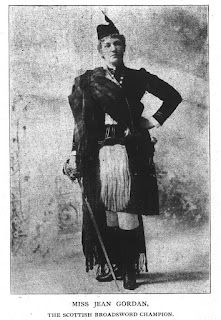 In 1897, Miss Jean Gordon (aged 24) announced her intention to meet all comers with the sword in the Boston Illustrated Police News! She had recently defeated a Captain Tom Shields in Boston.
The paper noted that she was "very pleasant and modest in demeanour"!
In 1895, she had met the noted swordswoman Ella Hattan, also known as "Jaguarina", in a broadsword bout. One of the judges was Col. Thomas Monstery, who had trained Ella. It was reported in the Daily Inter Ocean, but I've been unable to discover who won that fight, or even if the fight actually took place.
Posted by Eigon at 13:10 No comments:

I first heard of Seanan McGuire when she was one of the guests of honour at the last but one EasterCon, held in a hotel at Heathrow. She was jet-lagged, and introduced herself by waving a hand towards the audience and proclaiming: "Everything is lizards!"
This did not stop her from doing talks and taking a full part in the Convention, though, and I'd seen enough to know that I wanted to track down some of her books.
I haven't quite managed that yet (my list of books I want to read is exceedingly long) but a little while ago I discovered that Seanan McGuire is also a singer. I came across a slightly ropy YouTube video of her singing Wicked Girls on stage at a US Convention, and instantly sent off for the CD.
It arrived today; I've just been playing it, and it does not disappoint!
The title track mentions famous girls of children's fantasy literature - Wendy, Dorothy, Alice, Susan and Lucy, and Jane. These were the good girls, who had adventures and then went back to boring reality. The song celebrates the wicked girls, who choose to carry on having adventures. "It's better to fly and it's better to die
Say the wicked girls saving ourselves."
But this is only one of 16 songs, about Snow Queens and mermaids, fairy tales and carnival lights, crows and ghosts, with accompaniment from various musicians on guitar, flute, harp, fiddle, drums, piano, cello and djembe.
And apparently, this is Seanan McGuire's fourth album, so I may well be going back to CD Baby (who took the CD from the shelf on a satin cushion, and bore it lovingly to the packing room, and held a party when they sent it off to me, putting my picture on the wall as their customer of the year - or so they said!) for more.
Posted by Eigon at 12:33 No comments:

Email ThisBlogThis!Share to TwitterShare to FacebookShare to Pinterest
Labels: my kind of music

Sake Dean Mahomed (born Shiekh Din Muhammad) was born in Patna, India, in 1759. His father worked for the East India Company. His father died when he was young, and he went into service at the age of ten with Captain Godfrey Evan Baker, serving in the army of the British East India Company as a trainee surgeon. In 1782, Captain Baker resigned from the army, and Sake also resigned, choosing to follow the Captain to England.
He married an Irish girl, Jane Daly, who he met while living with Captain Baker in Ireland. Her family were opposed to the match, so they eloped in 1786, and Sake converted to Anglicanism as it was illegal for non-Protestants to marry Protestants at the time.
In 1794, he wrote his first travel book, The Travels of Dean Mahomed, in which he described several cities in India as well as military conflicts in India.
In 1810, the family moved to London and opened the first ever Indian restaurant in England. It was called the Hindoostanee Coffee House, in George Street near Portman Square. As well as serving curry, it offered hookahs to smoke - but the venture was not successful and ended due to financial difficulties.
He moved on to Brighton, where he opened a massage parlour and steam bath - which he termed "shampooing" from the Indian word champooi, for massage. This was described as a remedy for aches, sprains, rheumatism and other similar ailments, and Sake became famous - he was known as Dr Brighton, and George IV and William IV both used his services.
He died in 1851, and was buried in Brighton.

His son Frederick opened a gymnasium in Brighton where he taught fencing, boxing and gymnastics, and ran a Turkish Bath.

His grandson, another Frederick, became a renowned physician, working at Guy's Hospital in London and doing work on high blood pressure.
Another grandson, James, became Vicar of Hove in Sussex.
Posted by Eigon at 07:37 No comments: 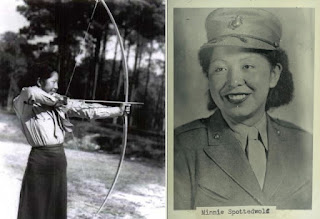 Minnie Spotted Wolf was a member of the Blackfoot tribe, and she joined the Marine Corps Women's Reserve in 1943 - she was the first Native American woman to do so. She grew up working on her father's ranch, including breaking horses, so she was used to hard outdoor work.
During the Second World War, she worked as a driver for visiting officers in Hawaii and California, and operating heavy machinery.
Her story was even featured in a comic book of the time - "Calling All Girls".
After the war, she trained as a teacher, and she married and had four children.
She died in 1988, at the age of 65.
Posted by Eigon at 08:03 No comments:

Edith Hall Dohan was the first student to be awarded a PhD in classical archaeology by Bryn Mawr College, in 1906. She was also the first Bryn Mawr student to become a Fellow in Athens, in 1903 when she joined the American School of Classical Studies - she was the only female student that year. She studied Mycenaean and Cretan pottery there, and met Harriet Boyd, joining her at the dig at Gournia, Crete in 1904 for her first field experience. Her letters home, to her parents and older sister Anne, paint a vivid picture of life for a woman archaeologist in the 1900s.

Later, she taught archaeology at Mount Holyoke College, while continuing to dig in Crete on behalf of the University of Pennsylvania Museum, then known as the Free Museum of Science and Art. At Vrokastro, she became the second American woman to direct a dig on Crete, and the third in Greece. In 1912 she left her teaching post to work for the Museum full time.
In 1915, she married, and took a break in her career to bring up two children while teaching part time.
In 1931, she returned to the University of Pennsylvania Museum to take up the post of associate curator of the Mediterranean Section. She was also the book review editor for the American Journal of Archaeology at this time.
Her last important work was a book on Etruscan Tombs. She died suddenly at her desk in 1943.
Posted by Eigon at 08:03 No comments: 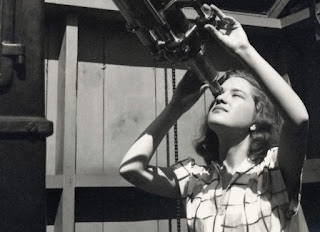 It seems a pity to only find out about people like this when they die.
Vera Rubin was an astronomer, who found evidence for the existance of dark matter thanks to her work on mapping the motion of stars within spiral galaxies. She found that the stars in the outer regions of the spiral move at about the same speed as the ones in the middle, leading to the hypothesis that most of the universe is filled with "dark matter", which we cannot detect directly. In the solar system, the outer planets move more slowly than the inner planets. According to general relativity, the stars should shoot off into space, but some unseen matter must be providing extra gravitational pull to cause them to stay within the galaxy.

During her career, Princeton declined to send her a course catalogue because they didn't accept women (she went to Cornell, where she met her husband), she had to talk to the astrophysicist George Gamow in the lobby of the building because they would not allow women in the offices, and when she became the first woman to be given access to the Palomar Mountain 200 inch telescope in California, she found there was no women's toilet.
She never won a Nobel prize, but she did win a gold medal from the Royal Astronomical Society - the first woman to do so since Catherine Herschel in 1828.
Posted by Eigon at 10:32 No comments: