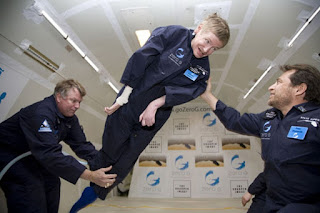 It was my day off when Stephen Hawking came to visit the Hay Cinema Bookshop, but I did see his wheelchair in the distance around town, surrounded by his entourage. He came when the Lion Gallery had some scientific sculptures in the window - very precise wood and metal structures showing, for instance, the structure of a black hole, and I know he stopped to look at them.
He also spoke at Hay Festival - I missed that, too, because I was working.
I did read A Brief History of Time, though, and I actually understood it - while I was reading it. Trying to explain it to someone else afterwards was a different matter!
He was a passionate advocate for the NHS, which saved his life, and another sad loss to the world.
Posted by Eigon at 05:47 No comments:

Another part of my childhood gone!
A cousin of mine went to the stage school in Blackpool (she was later Miss Blackpool), and whenever Doddy did a show there he would use the kids from the stage school as his Diddymen - so my cousin was a Diddyman!
More recently, he appeared at Hay Festival. That year the main marquee was set up on the Castle gardens and, part way through the act, he suddenly left the stage. A few moments later, he was back - but he actually had food poisoning, and had been throwing up in the bushes at the back of the marquee!
He wasn't just a stage performer, of course - he had his own TV shows over the years, and was also a very good Malvolio in Twelfth Night, as well as Yorick in Kenneth Branagh's Hamlet (in a flashback, obviously!).
And he was in Doctor Who, in the Seventh Doctor story Delta and the Bannermen, which was set at a holiday camp.
Posted by Eigon at 12:34 No comments:

I've just heard that the SF author Kate Wilhelm has died.
Now is probably a good time to recommend Where Late The Sweet Birds Sang to anyone who hasn't read it. She wrote a lot more that that, of course, but it's probably the most easily available of her works.
She also did a huge amount to mentor and encourage new authors, so this is probably also a good time to recommend Storyteller: Writing Lessons and More from 27 Years of the Clarion Writers' Workshop.
Posted by Eigon at 11:09 No comments:

I've been doing a bit of writing (the further adventures of my Steampunk spy, Li Bic), and got to a point where one character is reading while he waits for another character.
But what could he be reading?
I started looking for novels written before 1896, but I didn't want anything obvious, just something light by an author that might be forgotten now, but which would also shed a little light on what the character doing the reading is like.
And what I found was Loveday Brooke, Lady Detective, by Catherine Louisa Pirkis, a series of short stories published in the Ludgate Magazine. Even better, seven stories have been collected in a modern paperback, published by Wildside Press.
The Victorian young lady on the front cover looks a bit too pretty to be Loveday, who is a sensible woman of around 30, and of fairly non-descript appearance according to the first story, The Black Bag Left on a Doorstep.
But the stories are quite good fun. Loveday works for a London based detective agency, and is sent around the country to investigate a variety of crimes, including murder.
Country house burglaries seem to be a popular crime - in one story the local Detective Inspector mentions that one local country house has Electric Lighting, and supposes that, if all country houses did likewise, the burglary rate would drop almost to nothing. Loveday isn't so sure. The author's description of the electric lighting also gives the impression that she has no idea how it works, though she knows wires are involved (she says the electricity is stored in jars, in a little 'engine house').
What the stories do very well, though, is give a flavour of the period, from a woman's point of view. Loveday travels alone, and stays in local hotels when she is not pretending to be a relative of the housekeeper in the country house she is investigating, or taking up a position as a secretary who lives in the house. The butler in one story "treated Loveday in an easy, familiar fashion, evidently considering that an amanuensis took much the same rank as a nursery governess - that is to say, a little below a lady's maid and a little above a house maid."
I'm about half way through the book at the moment, and enjoying it very much - though the author does cheat, compared with later mystery writers. It's impossible for the reader to try to solve the case, because she conceals vital clues until the big reveal at the end.