Over on Facebook, I've been sharing beautiful art to break up the relentless bad news of current affairs, and I came across this artist. Zhou Shu Liang was born in China, and comes from a family of artists. In 1982, he moved to the United States and gained his BFA in painting from Massachusetts College of Arts in 1986, and his MFA from Boston University in 1989.
While he was there, he spent some time painting scenes of the Wampanoag Indian culture at the outdoor museum in Plymouth, Massachusetts. He's made Native American culture his speciality since then, and his paintings are beautifully detailed. He pays a lot of attention to historical accuracy, and has made many contacts and friends among Native tribes across the US.
Many of his pictures show Native warriors, but the one I particularly liked when I visited his website at www.liangstudio.com was this one: 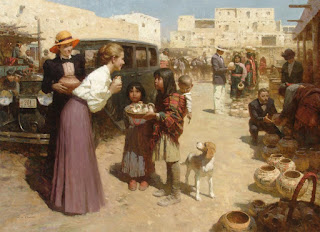 It's called Pueblo Market 1920 - and it immediately made me think of one of the main characters in my Steampunk stories. The white lady bending over the little girl's wares is just as I imagine Amelia Harper would be.

ZS Liang's prints and paintings are available at several galleries in the United States.
Posted by Eigon at 02:07 No comments:

I met Russell Smith at a couple of EasterCons, and saw him speak on several panels, where he was interesting and amusing, so when I saw his book on a stall at EasterCon last year, I had to give it a go.
It says something about the length of my "waiting to be read" shelf that I've only just now got round to reading it!
I thought I was getting a Victorian mystery at first, with a plucky street urchin become heiress heroine....
and then we were in a modern tube station, where a different woman was being attacked.
From then on, the time line moved between the two, as the modern woman tried to regain her memory after the attack, and work out why someone was trying to kill her, and the Victorian lady appeared to her as a ghost, and went through her own adventure in her own timeline.
There's lots of action, maybe a little too graphically described for my tastes (but I am a bit of a wuss), so what I liked were the quieter moments where "Rose" worked out how to use the new supernatural powers she'd acquired to help ghosts move on. The scene with the ghost in the pub was very good. "Rose" also gets two fun sidekicks in the form of Kara the paranormal researcher and Jennifer, who has superpowers of her own.
But it all comes back to Grenshall Manor in the end, and the secret in the North Wing.

This is book one of a series, and I also have Book 2 waiting, which I'm looking forward to.
Posted by Eigon at 10:38 No comments:

I saw a recommendation for a CD on Twitter a while ago, and it sounded interesting enough for me to order the CD.
It's traditional music at its finest, performed by Kate Fletcher and Corwen Broch, on a variety of interesting and obscure instruments such as the Kravik lyre, Trossingen lyre, Saxon lyre, the slovisha gusli (whatever that might be!), Welsh crwth and pibgorn, bagpipes and more. And some fine singing as well. They even include a list of the instrument makers who made the instruments used on the CD - and in the list of people they thank, they include "the trees and animals whose dead bodies made our instruments".
There are two CDs in the sleeve. The first has a variety of songs such as The Seal-Woman's Sea-Joy and other songs about seal-folk, the Song of the Travelling Fairies, and the title track Fishe or Fowle - a song about shape shifting.
The second CD is one long epic The Play o'de Lathie Odivere, sung once with musical accompaniment and once without. The song was first collected in the Orkneys in the 1800s, but the tune was collected in 1938 in Orkney by Professor Otto Andersson of Finland.
It's a quite magical album - it certainly transported me to another world while I was listening - and it can be found at www.ancientmusic.co.uk
Posted by Eigon at 11:23 No comments:

Apparently, it's World Women in Science Day, so I thought I'd share a photo of an astrophysicist called Naziyah Mahmood: 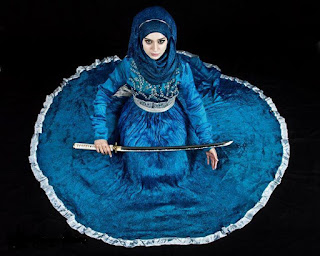 As well as being an astrophysicist, she did her postgraduate work in Space Mission Analysis and Design. She has worked for the European Space Agency and has also worked on particle physics projects with data from CERN. As a STEM Development Manager, her role was to promote gender equality in science and engineering fields. (STEM is Science, Technology, Engineering and Maths).
The YWCA chose her as one of Scotland's Most Inspirational Women Under 30, and EQUATE Scotland (an organisation for gender equality in science) chose her as an Inspiring Woman in STEM.
She was born in Scotland, and her family is of English, Pakistani and Arab origins. Most of her family are engineers, and she is also a hijab-wearing Muslim.

Naziyah practices martial arts, particularly the Korean style of Haidong Gumdo, with swords.
And she's a poet and short story writer.
And she's acted in the adaptation of a novel by Amy Hoff, Caledonia, which became a web series.
She also cosplays.

And she's done all of this with eyesight poor enough to be described as "partially blind" (which at the moment rules her out of her ambition to be an astronaut, for which applicants need 20/20 vision).
Posted by Eigon at 03:33 No comments:

Email ThisBlogThis!Share to TwitterShare to FacebookShare to Pinterest
Labels: science

The original one, that is - Richard Hatch, back in the 1970s when Battlestar Galactica was cheesy, and cost $1 million an episode. He had pancreatic cancer.
Gosh, I fancied him in Battlestar Galactica. He was never cheesy, just some of the stuff around him - Captain Apollo was always noble and heroic (and I was a soppy teenager). I even liked him in The Streets of San Fransisco, when he replaced Michael Douglas. 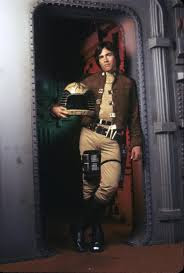