Trip on the River

The last time I went on a boat on the River Thames, I was eleven years old, and it was part of a school trip to see the Tutankhamum Exhibition at the British Museum. One highlight of the trip was seeing the gold death mask; another was getting lost on the Tube! I don't think we went a long way, but I remember passing HMS Belfast, and taking a photo of the dome of St Pauls.

I was delighted to learn that the river buses are integrated with the rest of the London public transport system, and I could use my Oyster card to pay.
Woolwich Pier is the furthest down the river that the river bus goes, and only when the tides are right. Here's the city clipper Tornado coming in to the pier: 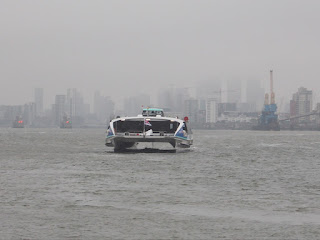 It was a bit of a grey day, but very comfortable on the boat. It's even got a little café. There was some sort of nursery school outing on board, too - I think the children were young enough to travel for free.
We passed the Woolwich Ferry, and went through the Thames Barrier: 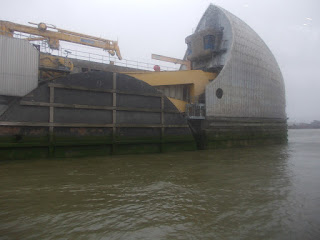 We went past the Greenwich Naval College and the Cutty Sark: 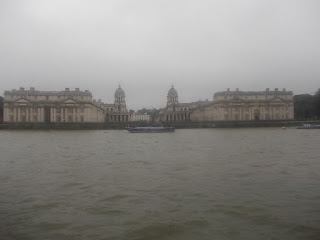 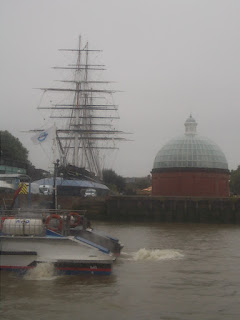 The river does a big loop, where we passed the O2 building, and then we were getting more central, around Tower Bridge.
We passed several other city clippers, with names like Monsoon and Jupiter.
We got off at Blackfriars Pier, and walked back to where we wanted to go along the Thames Path.
Travelling through London feels very different on the river - it was great fun!
Posted by Eigon at 03:36 No comments:

It was research for my story, honest!
The Young Man told me he knew of some wonderful Victorian pubs in the centre of London, which would be just perfect for some scenes in the story I'm writing.
And Victorian pubs are cool anyway.
So he took me to the Salisbury: 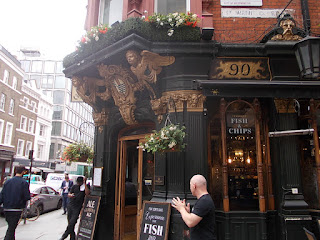 This is a magnificent pub, all etched glass mirrors inside, with a staircase with wrought iron bannisters, lots of brass candelabra, and a white marble top to the bar. They've also been serving fish and chips since 1860, so what to have for lunch was an easy decision! The fish and chips were really good. And it had all the features I wanted my fictional pub to have - we could even point to the table where my characters sat down for a drink!

Having enjoyed a real Victorian pub, we waddled across the road (full of fish and chips) to a fake Victorian pub. Mr Fogg's Tavern is also a very pleasant place to have a drink. It's a bit lower class compared to the Salisbury - the bar top is zinc rather than marble - and there are all sorts of things suspended from the ceiling, including a model Chinese junk and a spinning wheel! 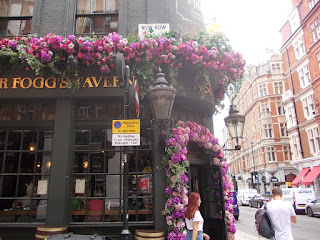 I had a half of Whitstable stout, which was very nice, and admired the barmaid's Victorian skirt.

Another wonderful Victorian pub nearby is the Princess Louise, which has excellent tiling, snugs right up against the bar, and more etched glass: 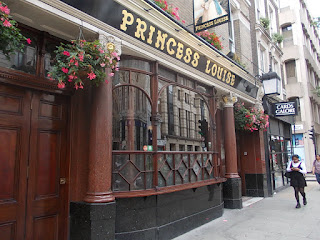 While we were near the British Museum we went into the Plough, which is not far from the Atlantis Bookshop - we went in there because I remembered that they have a portrait of Macgregor Mathers in the shop, who was one of the leading lights of the Order of the Golden Dawn, and he has a cameo role in my story. This pub has an upstairs room that was once used as a meeting place for London pagans. The beer I chose was Naked Ladies from Twickenham.

On the last full day I was in London, I foolishly failed to pack my raincoat in my backpack, and when we got off the bus near Trafalgar Square in the afternoon, the rain was bouncing down! Fortunately, the bus stop was right next to The Old Shades, and we huddled in the doorway for a moment or two before deciding that we might as well enjoy a half there while we waited for the rain to ease off. This pub dates from around 1898, with lots of wood panelling and pictures of Prime Ministers around the walls. The beers we drank were Trumans and Lewes Castle.
On the back window ledge there's a shelf of books, including a set of four that had got separated. I embarrassed the Young Man by insisting on leaning over a table of other customers, with the words: "I'm sorry - I work in a bookshop!" and putting the set back together again!
Posted by Eigon at 11:53 No comments:

Ben Aaronovitch uses a lot of real locations in his Rivers of London series, about wizard policeman Peter Grant, so we had a lot of fun tracking down some of them, mostly from Moon Over Soho.
The first murder in Moon Over Soho took place here: 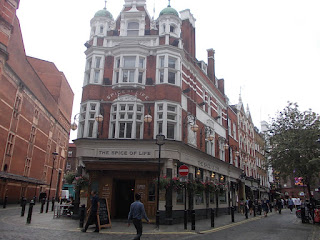 This is on Cambridge Circus, and the theatre showing Harry Potter and the Cursed Child is just next door.
And while we were in the Soho area, we also had to try to find the entrance to the Mysterioso club, a basement bar on Bateman Street, which we think may be under a Japanese restaurant.

We also had to stop at Patisserie Valerie to sit at the Peter Grant table and eat cake. The scene is on page 93 of Moon Over Soho:
"Simone grabbed my hand and practically dragged me inside, where the display cases glowed in the afternoon light.... [she] had a favourite table by the stairs, just the other side of the cake displays. From there, she pointed out, you could watch people coming and going and keep an eye on the cakes - just in case they tried to make a run for it....I wondered if I was being seduced or driven into a diabetic coma."
Like Peter, I had the chocolate cake with cream and more chocolate. It was, as Simone would say, scrumptious. The Young Man has to be more careful about his diet these days, and had something savoury.

We also went to Russell Square to try to find the Folly, where Peter and his boss Nightingale (not forgetting Molly the scary maid and Toby the dog) live. This was our best guess for the Folly's front door, though I think most of this row is actually owned by the British Museum: 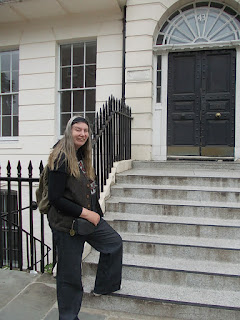 And while we were walking round Russell Square, we found the perfect place for lunch: 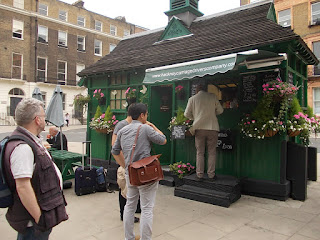 This is the Little Green Hut, built to serve the hackney cab drivers who had a taxi rank there, and now open to the general public. We had delicious rolls so full of Cumberland sausage, bacon and egg that my nose was bumping on the fried egg every time I bit into it!
There were some trailers parked along one side of the square too, belonging to Monumental Films, who were filming there - but we didn't see anyone famous!

Covent Garden is another site we visited - in the first book, Peter Grant is guarding a murder site just by the church when he finds himself taking a witness statement from a ghost. The Punch and Judy pub is just opposite.
Posted by Eigon at 12:41 No comments:

I've been on my holidays, and doing some research for my latest story.
It involves the Order of the Golden Dawn, and I knew that they met at what is now the Horniman Museum, back in 1896. So that was the first place to look at.
And it just shows the value of going to the places you're researching, because the original villa no longer exists. The original Museum was opened in 1890, but the collection continued to grow, so in 1898 a new Museum was built on the site of the house in Forest Hill, which opened in 1901. There are also extensive gardens - a Farmer's Market was taking place by the bandstand when we were there - and the museum has had various extensions over the years. 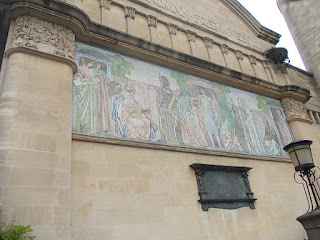 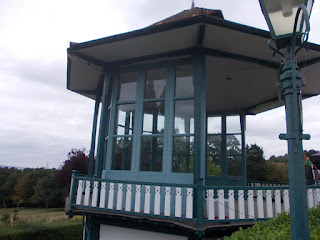 Here's the mosaic over the original entrance (the Young Man remembers going in that way as a child) and the bandstand, which has a fine view over the city.

So we had fun looking round the free exhibitions - the music gallery underground is absolutely brilliant, crammed with all sorts of instruments from all around the world, including experimental instruments like a harmonica/flute. We also said hello to the walrus, in the middle of the natural history gallery, which is famous enough to appear in a mural under a bridge near the station.

I'm going to have to use my imagination for the scenes in my story that take place at the Horniman residence, though, since the house no longer exists.

The Horniman family were tea merchants, as shown on a brick frieze further down the hill: 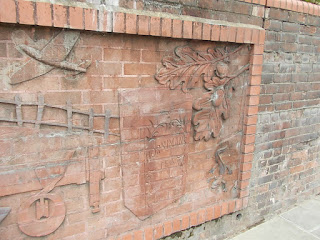 It's quite long, and seems to show scenes related to local history.
Posted by Eigon at 11:46 No comments:

Email ThisBlogThis!Share to TwitterShare to FacebookShare to Pinterest
Labels: London, museums, my writing

I've watched the very last episode of the Librarians (and what a brilliant finale to the season it was) so I was looking round for something else to watch when The Bletchley Circle came to my attention.

I first became aware of Anna Maxwell Martin when she played Rev. Merrily Watkins in the TV adaptation of Midwinter of the Spirit by Phil Rickman - but before that, she played Susan, a code breaker at Bletchley Park during the War, who gets a team together to solve a series of murders that the police are not managing to solve, using the skills they developed during the war as code breakers, but which they are not able to use (or even mention) in peace time.

I saw the first episode last night, and it was brilliant stuff, so I'm looking forward to the rest of the mini-series. I understand there's a second series, too, as well as a spin off set in San Francisco.
Posted by Eigon at 11:35 No comments: