I'd forgotten I had this picture, copied from somewhere on Facebook, I think.
I thought it would be a nice thing to share now, in memory of Stan Lee - here being enthusiastic about Doctor Who, with Matt Smith. 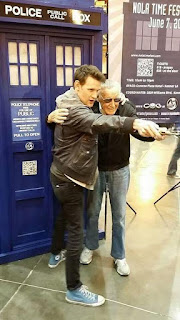 Excelsior!
Geronimo!
Posted by Eigon at 08:58 No comments:

Email ThisBlogThis!Share to TwitterShare to FacebookShare to Pinterest
Labels: Doctor Who, marvel comics

California is burning.
The wildfires are destroying whole towns (the entire town of Malibu has been evacuated), and over a thousand people are missing. There have been many deaths, and thousands of people have lost everything.
So it's really only a small footnote to the situation to be concerned that Sherwood Forest is in danger - or at least, the stand in for Sherwood Forest that was used for locations in the 1938 Errol Flynn and Olivia de Havilland movie The Adventures of Robin Hood (still my favourite Robin Hood film).
The area is actually known as Bidwell Park, and 5 acres of Upper Bidwell Park are burning. South of the Park, around the town of Chico, 700 acres have burned.
Meanwhile, at the Paramount Ranch, the Western town outdoor set has also burned down, according to Backlots blog. It's been used as a movie set for 90 years, most recently for the series Westworld.
Posted by Eigon at 11:04 No comments:

I'm not sure now how I found out about Native Realities Publishing, but I'm glad I did. They publish comics by Native American authors and illustrators. The first comic I bought from them was Captain Paiute, the origin story of a Native American superhero, and since I enjoyed that I thought I'd treat myself to Deerwoman, an anthology of stories by a variety of Native writers.
The name that was familiar to me (and I will get round to buying Trail of Lightning eventually, when the Mountain of Unread Books gets a little smaller) was Rebecca Roanhorse. Her story is called The Taste of White Flowers, Staining Her Lips. It's only two pages, but it draws you in, so that you're there in the bar drinking with the characters, one of whom is more than she seems....
The artwork is in a variety of styles, and the stories are about modern Native women, who go to High School, live in modern apartments, are in lesbian relationships - and always there's the threat of violence from men, and sometimes Deerwoman takes revenge.
Some of the stories that stood out for me were Deerwoman: A Vignette, by Elizabeth LaPensee, illustrated by Jonathan R Thunder and Wives by Darcie Little Badger, with illustrations by Tara Ogaick, and Changing Woman by Tatum Bowie - but it's all good stuff.
It's not necessarily easy reading - and it's suggested for mature readers - but it brings up serious issues. The publishers are supporting Arming Sisters, an organisation that is helping indigenous communities through self-defence. Indigenous women have a high risk of violence, and organisations like Arming Sisters and the Coalition to Stop Violence Against Native Women (these and other organisations are listed at the back of the book) are working to improve the situation.
Posted by Eigon at 13:26 No comments:

I heard a forgotten piece of Manchester history on Broadcasting House this morning.
As part of the coverage of the 100th anniversary of the end of the First World War, the reporter had uncovered a story that had been forgotten in Manchester, but which was still fondly remembered in Charleville-Mézières. This was a town that was one of the first to be taken over by the German forces, and the last to be liberated, just before Armistice Day - and the Germans destroyed large areas of the town as they retreated.
Hearing of this, the people of Manchester rallied round and raised money to rebuild the town, providing a hospital and school and other buildings, and it's lovely to see that the road going past the hospital is called Avenue de Manchester. Then the Mancunians forgot all about it, but the people of Charlevills have recently got back in touch with Manchester to celebrate their ties of friendship.
The town is close to the border with Belgium, and also close to the Ardennes national park. It's also famous for it's World Festival of Puppet Theatres!
Posted by Eigon at 13:06 No comments:

I don't think I ever went into Chester Cathedral when I was last in Chester - which must have been the 1970s, which is a fairly scary thought. I certainly didn't remember the Addleshaw Tower, which was built in 1974 to house the bells.

It's well worth visiting. One of the first things I came across was the Consistory Court, which used to be used to try cases pertaining to the Church, including accusations of slander. It's arranged round a big table, with benches on each side, a witness stand, seat for the judge, and a seat perched high on one corner like an umpire at a tennis match. All this enclosed with a wooden partition. I think it's unique in the country.

I also loved the Abbot's Chapel, which became the Bishop's Chapel at the Reformation, accessed up spiral tower stairs.
Heading towards the East end, I passed through the Quire, with the magnificent misericords. Then I came to an area with a lectern, and seals of the saints in the tiling of the floor, which made me grin delightedly. This is exactly what Katherine Kurtz was describing when she wrote Deryni Rising - the climactic magical battle in the cathedral depends on the young King finding the seal of St Camber in the tiled floor to trigger his powers.
I also lit a candle to St. Werburgh, the patron saint of the cathedral - the shrine was rebuilt in the 19thC after being damaged at the Reformation. St Werburgh was the daughter of King Wulfhere of Mercia and St Ermenilda, and her grandmother was St Sexburga, Queen of Kent. She became a nun, and was put in charge of all the convents of Mercia. Her most famous miracle is of bringing her pet goose back to life when it had been killed for the table (I suspect she also sacked the steward responsible!). She died around 700AD.

While strolling round the cloisters, I was approached by two young school children (with teacher in tow), who were handing out leaflets for a sale they were putting on.
This was in the Chapter Room, where they'd laid out clocks made from an old LP, splattered with paint and fitted with a clock mechanism, and painted mugs. There were a few other, smaller gifts as well. I asked how the clocks had been made, and a little boy gave me a detailed description of how they had put the records on a turntable, powered by an exercise bike, which they had then squirted paint onto. I remember making pictures like that at school fetes. They seemed to have had great fun making the clocks.
All this was to raise money for Passion For Learning - they were also looking for volunteers to join the team, to spend between one and three hours a week working with kids to make learning fun, and to help children reach their full potential.
I bought a mug. It's hideous.

The cathedral café is in the medieval refectory, with a magnificent lectern built into the wall, with stairs, for the monk doing the reading while the rest of the brothers ate.
And back to the gift shop, which was full of very beautiful things (and they already had the Christmas stock on display) but very little which was specific to that particular cathedral. I had to ask the staff if they had anything about St Werburgh, and all they could come up with was a postcard.

From the riverside, I walked along the wall walk as far as the racecourse (once the Roman quayside), and around Chester Castle, which was extensively rebuilt to house the Shire Hall, now the Crown Courts, and the headquarters of the Cheshire Regiment - the Regimental Museum is still there, along with what is left of the medieval castle.

I'd done enough wall walking for a bit, so I followed the main road back into the centre of Chester to explore the Rows. These are unique to Chester, with a raised and covered walkway going over the top of the ground floor level of shops, and with the first floor shops set back.
Right in the centre of Chester, by the crossroads, is the Victoria pub, where I stopped for a welcome half of Adnams. There was a busker with a guitar outside, and further along one of the streets was a violinist (both very good). At one point, they swapped their pitches for the rest of the afternoon.

Moving on to the square, where the Roman forum once was - and the remains of the Legionary strong room are displayed down the side of the market hall. This was part of the decoration at the end of the Rows nearest the square: 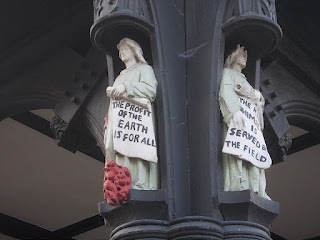 Also in the square, this gift from Chester Zoo: 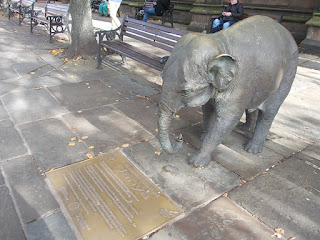 And then more walking around the Walls until I came to the Cathedral.
On the green near the Cathedral there was a falconry display going on - I watched for a bit beside the King Charles Tower.
Posted by Eigon at 06:53 No comments:

Email ThisBlogThis!Share to TwitterShare to FacebookShare to Pinterest
Labels: Chester

Just by the Roman amphitheatre is a church which claims to be the original cathedral for Chester, built somewhere in the 4thC (or possibly even earlier!), and later being rebuilt in stone to become the Saxon minster for Chester. At that time, the amphitheatre was being used as some sort of fortified residence, with buildings in the arena and most of the entrances blocked up. It is, of course, outside the City walls. 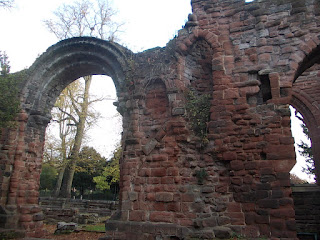 These are some of the ruins at the east end - I was too early to go inside the church, which opens at 10am. The church was reduced in size at the Reformation, and this bit was converted into Tudor flats! Now the churchyard is home to these cute little things: 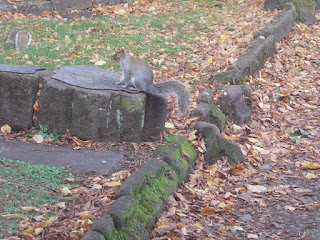 I'm sure they were posing for me!

I then crossed the amphitheatre again to get to the Roman garden, which runs along the outside of the City Wall, and is full of columns found in the City, as well as more recent mosaics, and a replica hypocaust. 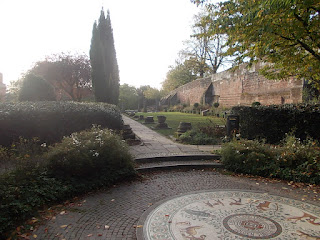 I didn't expect to find some Civil War history there as well - there's a portion of wall in the picture which has been rebuilt, after being breached by the Parliamentary forces, who set up their cannons at St Johns. There's a plaque at the base of the wall to remember the dead of both sides, set up by the Sealed Knot.

The Roman garden leads down to the river: 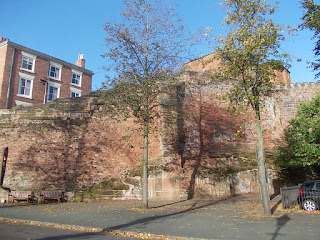 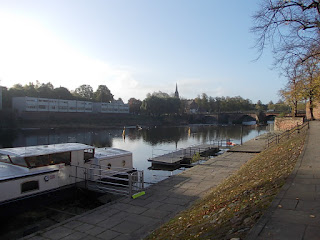 It must have been somewhere close to here that my grandad hired a rowing boat to take my gran out on the river, not long after they got married. They'd come down on the train from Manchester for day trips - it must have been 1937 or 38.
Posted by Eigon at 14:25 No comments: