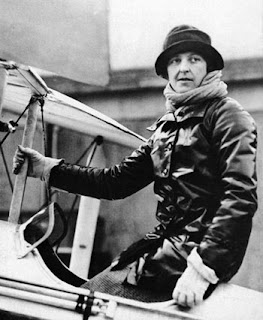 She's better known as a pioneering pilot, but her skills with an aircraft also made her a trailblazer in archaeology. In association with Gertrude Caton-Thompson and Elinor Wight Gardner, in 1931, she flew over the area where they were digging at Kharga Oasis in Egypt, taking arial photographs from her DH 80a Puss Moth. Gertrude and Elinor had improvised a landing strip for her by watering the sand, and walking camels round the edge to mark out the area.
In fact, this was one of the first times that arial photographs were used in archaeology. Gertrude Caton-Thompson had previously got the assistance of the South African Air Force, who flew over Great Zimbabwe for her to take photographs of the site. Gertrude had flown with Major Wynne-Eyton herself, to identify archaeological remains, and she and Elinor also flew with Lady Mary.
Posted by Eigon at 11:23 No comments: 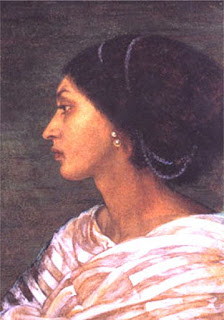 This painting is usually known as Head of a Mulatto Woman, by Joanna Boyce, one of the Pre-Raphaelite circle of painters. The model was Fanny Eaton, a mixed race woman from Jamaica. She also sat for Millais, Rossetti, Sandys and others, to supplement her earnings as a cleaner. Her husband died in 1881, leaving her alone to support her ten children. She also worked as a seamstress, and later as a cook on the Isle of Wight. She died in 1924, aged 86, at the home of one of her daughters in London. Fanny's maiden name was Antwhistle.
Much of this information comes from the blog Travels in Art and Aesthetics, where the blog post recieved comments from several of Fanny's descendants.

Joanna Boyce, also known under her husband's name as Joanna Mary Wells, painted portraits, scenes from everyday life and some landscapes. She was the sister of George Price Boyce, a Pre-Raphaelite watercolourist. She died in 1861 following complications after the birth of her third child.
Posted by Eigon at 09:36 No comments:

I got annoyed by a discussion on Historum forum, about female Viking warriors, but ranging a lot more widely. One person in particular is adamant (despite any evidence to the contrary) that even little weedy men can overpower any woman, and that therefore women were never warriors. 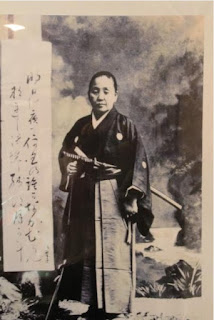 So here are the onna-bugeisha, the samurai women of feudal Japan, trained in the use of the naginata, kaiken (dagger) and the art of tantojutsu (a knife fighting style of martial arts). Their principle purpose was to protect the household, family and honour in times of war, but they also went into battle alongside samurai men.
In 1868, for instance, Nakano Takeko was recruited to become the leader of a group of twenty women using the naginata, who joined the 3,000 other Aizu samurai in the battle of Aizu. Unfortunately, they were on the losing side, and Nakano Takeko was killed when she was shot in the chest.
Tomoe Gozen was a samurai archer. She died in 1247 during the Genpai War. During the Battle of Awazu she is known to have decapitated an enemy warrior after unhorsing him.

Maud Cunnington was born in Wales, at Briton Ferry, and she was involved in pioneering archaeology.
From 1897 she was involved in rescue archaeology on Salisbury Plain, and also conducted digs at some of the most famous sites on the Plain, like West Kennet long barrow and Knap Hill.
And in 1925 Squadron Leader Gilbert Insall, who had won a VC in the First World War, flew over the area in a Sopwith Snipe, and noticed dark markings on a field. This was one of the first instances of ariel archaeology. He told Maud, and she conducted a dig with her husband, Captain Cunnington, her nephew and an excavator called William Young.

All that remained of the henge were pits in the meadow, so when the Cunningtons bought the field in 1928, they decided to mark the positions of the pits with lengths of concrete drainpipe, to give some idea of what the monument would have looked like. They painted the tops of the capped drainpipes the same colours as the plan of the site, to distinguish the different rings. Later they gave the field to the Ministry of Works, to preserve it for the nation. The Ministry of Works put in a plaque showing the plan of the site with the coloured posts - and sadly this has now been stolen. All this information comes from Mike Pitts' blog Digging Deeper.
Maud Cunnington became president of the Wiltshire Archaeological and Natural History Society in 1931 and in 1948 she was awarded a CBE for her services to archaeology, the first woman to recieve the honour. Sadly, by that time she had Alzheimers, so never knew, and she died a few years later, leaving a substantial sum to Devizes museum. 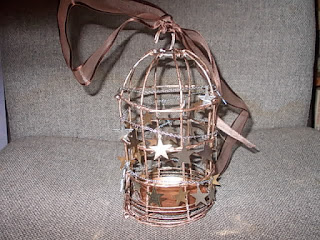 I have been creating! This is a prop for the Steampunk costume I'll be wearing at EasterCon this year - it's a cage for trapping fairies! It's only about 7 inches high. I painted it a coppery colour (technically Runelord Brass), and added the star necklace and the ribbon. I also have a Fairy Attractor (a garden ornament that glows in the dark) and a little wicker basket about the same size as the cage, to transfer the stupefied fairies into captivity. We will be harvesting the fairy dust, which they shed naturally anyway, and tagging the fairies to observe their migration patterns!

And this is the costume I'll be wearing, but with a straw boater instead of a solar topee! This photo was taken at the 2014 Hereford History Day, when the theme was the First World War. 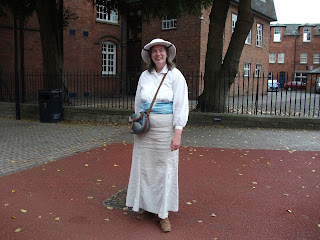 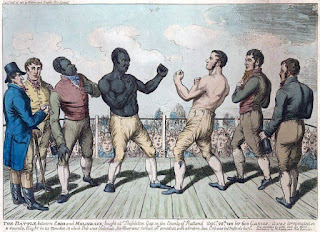 Here's Tom Molineaux, professional boxer, in 1811 - so a bit before the Victorian era. The picture is of the prize fight against Tom Cribb for the English title.
Tom Molineaux was born a slave in Virginia, and together with his twin brother he was trained as a boxer by his father for the entertainment of plantation owners. He won his master so much money in bets that he was granted his freedom. He then moved to England to pursue a career as a professional prize fighter.
This particular fight lasted for 35 rounds, and Molineaux was defeated.
In the return match, the following year, Cribb won again, breaking Molineaux's jaw. "The Moor was carried off senseless" says the caption at the bottom of the picture.

The black man standing behind Molineaux is Bill Richmond, also an ex-slave turned boxer, who was Molineaux's trainer for the fights. He was born at Staten Island, New York, and became servant to the Duke of Northumberland, who took him to England in 1777. There he once acted as a hangman, was sent to school, and then apprenticed to a cabinet maker in York. However, he went on to earn his living by boxing, and also fought Tom Cribb and lost - in the 60th round! When he retired from boxing, he bought a pub, the Horse and Dolphin in Leicester Square, London, where he set up a boxing academy. He died in 1829, at his home in London, aged 66.

Tom Molineaux, sadly, finished his boxing career in 1815, and spent some time in a debtor's prison. He also turned to drink. By 1818, he had found his way to Ireland where, penniless, he was given shelter in the band room of the 77th Regiment in Galway - where he died, aged 34, "where he had been maintained the last two months, and very humanely attended by three people of his colour" it was reported in The Times of 18 August 1818.
Posted by Eigon at 05:03 No comments:

Custard creams and the 'network of global corporate control' -

Happy Year of the Monkey!
Posted by Eigon at 13:12 No comments:

I got the box set of the new Thunderbirds series for Christmas, and I've been loving it. I grew up with the original - and the remake has got it right, everywhere that counts! The launch sequences are superb, and true to the original - the palm trees still lean back for Thunderbird 2, and the swimming pool still slides back. The attention to detail makes me very happy when I'm watching it. (Brains' accent is a bit wierd, though....)
The scripts have been good, too - right up until they got to Tunnels in Time, the South American archaeology episode.
I could have accepted this one if it had been made in 1966 - just about. This view of archaeology was out-dated even then.

No archaeologist is like the one in the episode. I'm sure there could have been a good story about getting trapped in an ancient tomb which had a more realistic depiction of an archaeologist, but this looks as if it was written by somebody who knows nothing about real archaeology, but who has seen the Indiana Jones films. He came across as more of a treasure hunter than an archaeologist. A more realistic archaeologist would have been far more interested in how the traps worked and what that told us about whatever South American society it was supposed to be than in plundering the gold and silver.
And, of course, there's the little matter of the 1,000 year old traps in the pyramid/mountain/cave system that still work perfectly.

It's a pity really, because all the other episodes have been so much fun.
Posted by Eigon at 08:39 No comments: