The Leakey family are among the "aristocracy" of archaeology - justly famous for their work in Africa. Mary Leakey was the wife of Louis Leakey, working with him for many years at Olduvai Gorge, and the mother of Richard Leakey, who also went on to become a famous archaeologist.
She had an interest in archaeology from an early age, but had an unconventional education, so was unable to go to university. However, she attended lectures on archaeology, and studied under Mortimer Wheeler at the London Museum. He accepted her to work on her first dig, at St Albans. She also worked for Dorothy Liddell at Hembury, a Neolithic site, where she worked for four years, until 1934.
She met Louis Leakey when she was hired to illustrate his book Adam's Ancestors.
They spent much of their time, after they married, working on sites in Kenya and Tanzania, including Olduvai Gorge and Laetoli, where they brought up their children Jonathan, Richard and Philip. These sites are of immense importance in the study of early hominids.
She died in Nairobi in 1996, at the age of 83.
Here she is, with a cast of the famous footprints found at Laetoli, made by an early hominid classified as Australopithicus afarensis, around 3 million years ago: 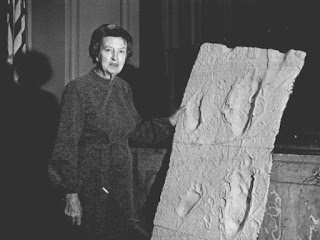 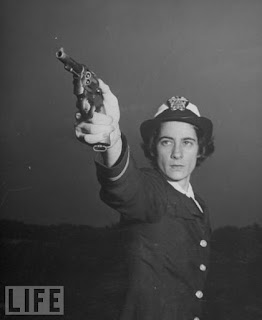 By the end of the Second World War, around 84,000 women had been accepted into the WAVES programme of the US Navy - standing for Women Accepted for Volunteer Emergency Service. Around 8,000 women served as officers. Many served in secretarial and clerical positions, but there were also aviation mechanics, photographers, control tower operators and intelligence personnel. In 1944, African American women were also accepted into the programme.
Originally, it was thought that women would only join up for the duration of the war, but in 1948, the Womens' Armed Service Integration Act was passed, allowing women to serve alongside men as permanent members of the armed forces in the US. 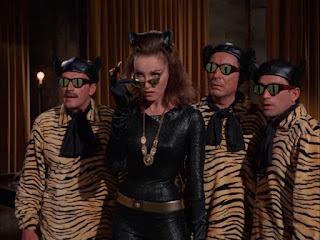 For International Cat Day, it's got to be Catwoman, and her henchtigers!
Posted by Eigon at 11:25 No comments:

The Ministry of Unladylike Warfare

So I've finally put my latest story on Smashwords - and somewhat to my surprise, I've already sold 2 copies!
I had a lot of fun with this one, researching the early days of the British secret service and SOE and then, in the second half of the story, sending my heroine, Li Bic, to Manchester's Chinatown - which didn't actually exist in 1895, but this is my alternate history, so in my universe the Chinese started arriving from Hong Kong in the 1860s instead of the 1960s.
I was at a panel discussion at EasterCon last year, at the Manchester Hilton, which was talking about Manchester's rich history and wondering why more stories are not set there, especially in the Steampunk genre, when Manchester was the manufacturing capital of the world as far as cotton was concerned!
I'd already decided to send Bic there, but hearing the talk gave me added confidence - it would have been lazy to send her to London, and I wanted to play with the history of my home city. 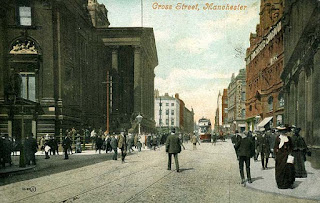 And, since Bic is undercover as an American newspaper reporter, here are the offices of the Manchester Guardian, which she visits in the course of the story.
Posted by Eigon at 11:27 No comments:

Email ThisBlogThis!Share to TwitterShare to FacebookShare to Pinterest
Labels: Manchester, my writing I only went into Oxfam to get out of the rain!
And then I saw this wonderful tea set with the Hendrick's Gin design. It says "A most unusual gin that is almost certainly not for everyone."
The whole lot cost me £5.99!
Posted by Eigon at 11:31 No comments: