I went to see the film The Aeronauts last night, in which scientist James Glaisher is taken up in a balloon by Amelia Wren, the widow of a professional balloonist, in 1862. It's based on true incidents - though the ascent in the film was actually made with a male colleague - they broke the record for height, at around 35,000 feet (about 37,000 in the film) and made scientific observations that contributed to the study of meteorology and weather forecasting.
I really enjoyed the film, and did a bit of research when I came home to find that the fictional Amelia Wren was based on some real life women balloonists.

One of the most important of these was the French woman Sophie Blanchard, the first professional woman balloonist. She was married to a balloonist, Jean-Pierre Blanchard, and after he died she continued to make ascents. She also, like Amelia in the film, had a parachuting dog!
She became a favourite of Napoleon, who made her Aeronaut of the Official Festivals, in which role she made ascents to celebrate the birth and baptism of Napoleon's son, as well as at other official occasions. She also crossed the Alps by balloon.
Sadly, her career ended in tragedy, in 1819. She was making a night time ascent from the Tivoli Gardens in Paris, and setting off fireworks, something she had done before. This time, though, one of the fireworks set the hydrogen in her balloon alight and the balloon crashed onto the roof of a nearby house. Sophie was tangled in the netting, and fell from the roof to the street below. She was the first woman to be killed in an aviation accident. Money collected at the time of her death was used to construct a memorial above her grave at Pere Lachaise cemetery, depicting a balloon in flames. 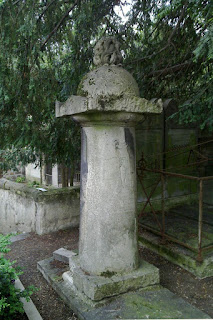 The Green Death on Location

I've been watching the 1973 Doctor Who story The Green Death - The One With The Maggots. It's also the one with a very strong environmental message which still looks very topical today.
They did quite a lot of location shooting for the story in South Wales, at a pit head and a disused video tape factory (which became the headquarters of Global Chemicals), and a big slag heap which they covered with giant maggots.
It was a very industrial landscape in those days, but the time of the National Coal Board was coming to an end.
One of the extras on the boxed set was a report from Wales Today, in which Jon Pertwee returned to the area to open a new visitor centre for a nature park. The slag heap had been landscaped, the pit was long gone, and there was a lake.
I looked it up and was pleased to see that Parc Cwm Darran is still there, somewhere near Caerphilly. There's a camp site and various outdoor activities, and they drained the lake in 2006 to turn it into a wetland area for birds.
Posted by Eigon at 07:15 No comments: