Goodbye, Blake - Who Will Lead the Resistance Now? 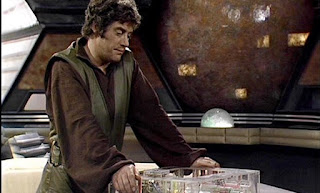 Sad to hear that Gareth Thomas has just died, aged 71. Here he is in one of his most famous roles, as Roj Blake in Blake's Seven. I remember trying to watch this on a tiny portable TV with appalling reception at college, with one person holding the wire to the ariel up to get the signal for the whole episode! Of course, he was rather outshone by Avon (Paul Darrow) who had the best snarky lines!
He was also in a couple of other cult classics of the 1970s and 80s - in Children of the Stones, he was the sensible dad who had just moved into Avebury, which was not a normal village by any stretch of the imagination.
After Blake's Seven he was, again, the dad - and Welsh resistance leader - in Knights of God, which was also the last role for Patrick Troughton, as Arthur, mystical leader of the resistance against John Woodvine's evil (and increasingly bonkers) Prior Mordrin.
He even had a guest role in Torchwood, more recently, in the episode Ghost Machine.
I understand that there is a Blake's Seven audio series from Big Finish where he also played Blake, as well as appearing as various characters in Doctor Who audio adventures.
Looking down the list of his credits on Wikipedia, he appeared in quite a few things I remember watching, like the Civil War drama By the Sword Divided. He was also in the TV adaptation of the childrens books by Jenny Nimmo, Emlyn's Moon and the Chestnut Soldier, which drew on Welsh legends for the fantasy element. The first book in the series is the Snow Spider.
Posted by Eigon at 10:54